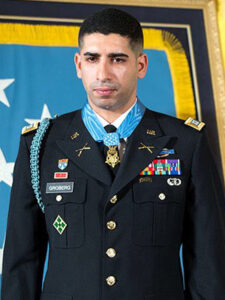 Captain Florent A. Groberg distinguished himself by acts of gallantry and intrepidity at the risk of his life above and beyond the call of duty while serving as a Personal Security Detachment Commander for Task Force Mountain Warrior, 4th Infantry Brigade Combat Team, 4th Infantry Division, during combat operations against an armed enemy in Asadbad, Kunar Province, Afghanistan on August 8, 2012. Captain Groberg’s extraordinary heroism and selflessness above and beyond the call of duty at the risk of life in keeping with the highest traditions of military service and reflect credit upon himself, 4th Infantry Brigade Combat Team, 4th Infantry Division, and the United States Army. Florent Groberg wrote a book entitled “8 Seconds of Courage” which tells the astonishing story of how he saved lives in Afghanistan by tackling a suicide bomber and becoming the first immigrant since the Vietnam War to receive the Congressional Medal of Honor for his heroism. On November 12, 2015, he received his Medal of Honor from President Barack Obama.

Listen to Veterans Radio's Interview with Florent A. Groberg