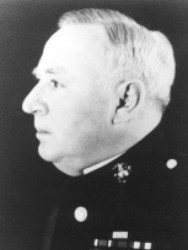 The President of the United States of America, in the name of Congress, takes pleasure in presenting the Medal of Honor to First Lieutenant Edward Albert Ostermann, United States Marine Corps, for extraordinary heroism in action at Fort Dipitie, Haiti. In company with members of the 15th Company of Marines, all mounted, First Lieutenant Ostermann left Fort Liberte, Haiti, for a six-day reconnaissance. After dark on the evening of 24 October 1915, while crossing the river in a deep ravine, the detachment was suddenly fired upon from three sides by about 400 Cacos concealed in bushes about 100 yards from the fort. The Marine detachment fought its way forward to a good position, which it maintained during the night, although subjected to a continuous fire from the Cacos. At daybreak, First Lieutenant Ostermann, in command of one of the three squads which advanced in three different directions, led his men forward, surprising and scattering the Cacos, and aiding in the capture of Fort Dipitie.