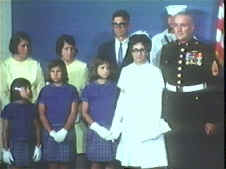 Next to the word “Marine” in the dictionary, there should be a notation… “See Jimmie Howard”. Perhaps no other words in the English language better describe what it means to be a member of the Corps than the name of the man who led the most decorated unit in American military history in the most improbable battle of modern warfare.

It was the early days of the United States’ involvement in the war in Vietnam. There had been battles and already 21 Americans had earned Medals of Honor. But nothing could have prepared the veteran Platoon Sergeant in Company C, 1st Reconnaissance Battalion, 1st Marine Division for the nights to come. Everyone knew the enemy controlled the areas west of the base camp at Chu Lai, and recent intelligence reports indicated large troop movements and buildups beyond the relative safety of the Marine outpost. It was time to strike back and prove to the enemy that they were on “Marine Corps Turf”.

The sun was falling behind the western horizon as the helicopters moved quickly to the top of Hill 488, then flew back to the base camp leaving behind Staff Sergeant Jimmie Howard and his fifteen Marines. Two Navy Corpsmen completed the small unit delegated the mission of watching for enemy troop movements in the valley below and calling in artillery and airstrikes on them. For two days Howard and his men did their jobs well. The North Vietnamese control of the area was disrupted by the effectiveness of the American firepower.

It didn’t take the enemy long to figure out that there had to be someone in the area watching them, directing fire upon their every move. By the third day Howard’s Battalion Commander A. J. Sullivan began to sense the danger the small recon patrol faced and offered to pull them out. S/Sgt Howard believed he could hold out one more day and requested permission to remain on the hill. By the time word reached Chu Lai that a full NVA battalion of 200-250 well-trained soldiers was moving on Hill 488, it was too late to pull Howard and his men out. Somehow they would have to survive the night. It was June 15, 1966.

Everyone in the patrol knew it was coming. S/Sgt Howard placed all of his Marines in strategic positions around the summit of the almost barren hilltop, with orders to pull back into a tight perimeter the moment the enemy struck. That moment came at 10 P.M. that night, only 12 feet from one of the Marine defenders. As the enemy swarmed the hill amid gunfire, grenades, mortars, and support from .50-caliber machine guns, Howard’s men pulled back into a tight circle only 20 yards in diameter.

Back-to-back they began to defend their small perimeter, counting on each other to work as a team to do the impossible. S/Sgt Howard moved among his men, encouraging them, directing their fire, shoring up the weaknesses in the perimeter. For most of his Marines, it was the first major test of combat. Huddled in the darkness amid the crash of grenades and mortars, the sky filled with tracer rounds, and outnumbered more than 10 to 1; the leadership and inspiration of S/Sgt Howard were all that sustained them.

Then quiet engulfed the hill as the enemy pulled back, their fanatical human wave assault initially repulsed. S/Sgt Howard looked around him. Every one of his young Marines and both Corpsmen had been wounded in the initial attack. Several were dead. Worse, he knew that the enemy would return in force again at any moment. Grabbing the radio Howard told Colonel Sullivan back at Chu Lai, “You have to get us out of here.” But no rescue force could reach Howard’s men that night…the Marines would have to hold out until dawn.

Then from down the hill, the enemy began to taunt the few survivors on Hill 488 shouting into the darkness, “Marines, You die in an hour.”

One of Howard’s Marines asked, “Can we yell back at them?”

With nothing to lose Howard told his brave young men, “Sure, yell anything you like.” They did, and soon their taunts back to the enemy were met with gunfire. The enemy was preparing to swarm the hill once again. Then the beleaguered Marines caught the enemy off guard as they joined voices in a “horse laugh”. Later S/Sgt Howard said, “They were shooting at us and when we started laughing… they stopped. There was complete silence. I think it had a chilling effect on them. They must have known we were terribly outnumbered, but here we were laughing at them.”

S/Sgt Howard knew the quiet wouldn’t last long, however. He surveyed what remained of his Marines and found that ammunition was running low. The grenades were gone, expended to push back the first wave of the assault. So Marine Corps Staff Sergeant Jimmie Howard issued one of the most unusual combat orders in recent history…..”Throw Rocks!!”

As incredible as the order sounded, it worked. When the enemy soldiers began to push their way through the sparse brush and knee-high grass to probe the perimeter, Howard’s men threw rocks at them. Mistaking the rocks for grenades the enemy soldiers would move quickly into the open, allowing the defenders clear shots that made every round of remaining ammunition count.

For five hours the enemy alternated between small probes and full-scale assault on the surviving Marines. S/Sgt Howard continued to encourage his battered platoon, direct their fire, and calling in aerial support. At times the fighting was hand-to-hand, the enemy so close that Howard directed aerial staffing runs within 30 feet of his position. From Chu Lai, Colonel Sullivan listened to Howard’s calm, precise voice across the radio. Then, shortly after 3 a.m., the radio went dead. At Chu Lai there was dread…the assumption was that Howard was dead…his brave platoon wiped out.

Shot in the back, S/Sgt Howard wasn’t dead but he couldn’t move his legs. As the enemy continued to assault his perimeter the wounded leader did his best to encourage his Marines. He kept reminding them that if they could just hold out until daylight, more Marines would come and pull them out of there.

As daylight dawned a helicopter approached the hill. The Marines were still taking fire, the battle wasn’t yet over. The chopper was shot down and the pilot killed. At dawn, a Marine company began the trek to relieve the remnants of Howard’s platoon. Two more Marines were killed and it wasn’t until noon that they finally reached Howard’s perimeter on Hill 488. Five of the defenders on Hill 488 were dead. A sixth died en route to the base camp at Chu Lai. When finally the rescue effort reached S/Sgt Howard and his men, among the 12 survivors there remained only eight rounds of ammunition.

Gunnery Sergeant Jimmie E. Howard stood proudly at attention next to his wife and six children. The story of his heroic stand at Hill 488 was read and then-President Lyndon B. Johnson placed the Medal of Honor around the neck of an incredible leader and true American hero. With tears in his eyes, the grizzled Marine then stepped to the microphone to give the credit to his 15 brave Marines and 2 Navy Corpsmen.

Seventeen young men, 15 Marines, and 2 Navy Corpsmen. Jimmie Howard had always called them his “Indians”. He had every reason to be proud of them, they had survived, demonstrating courage and resolve which was unprecedented. They may have been, in fact, the most decorated unit in military history. To Jimmie Howard and his 17 “Indians” were awarded: