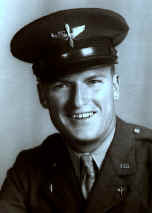 It is strange sometimes how the lives of people we never knew existed become interwoven with our own and how this interconnection can be made manifest to us at times when we least expect. Surely divine intervention plays a part.   I don’t remember my father, Lt., Ray E. Jackson. He was a P-38 fighter pilot who went down over Germany on September 15, 1944, ironically, on the 4th anniversary of his marriage to my mother, Christine Matthews Jackson. Many years later she told me that she received roses from him as an anniversary present on that same day. 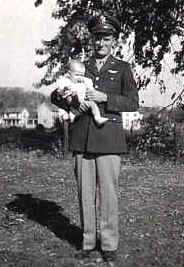 memories of him from my childhood were those I imagined as I read a diary he had kept beginning October 31, 1942, when he had written of going duck hunting with a friend and upon returning learned that he had received notice from the Army to report for active duty on Tuesday, November 10, at the 8th Street Theatre in Chicago, IL. From there he would report to Commanding Officer, Air Forces Classification Center, in Santa Ana, CA, on November 13, 1942, and later to Thunderbird Field #2 in Phoenix and finally to Luke Field, AZ.

In 1986, Clyde Deavers, a veteran of the 367th Fighter Group, and a friend and fellow pilot of my father, was traveling through Illinois and decided to stop in Canton, IL, and to try to contact some of his friend’s family who he knew had lived there. He was able to contact my uncle, Barton Matthews, and from there located the whereabouts of my mother who had remarried many years earlier and was at that time living in Carthage, IL. He visited my mother and later sent her a book by Richard Groh entitled The Dynamite Gang – The 367th Fighter Group in World War II. My mother sent this book to me.

There is one picture of my father in that book and more than one reference to him. It was from this book that I learned that he had flown out of both Stoney Cross and Ibsley, England. In 1990, my husband, Joe, and I were able to take our first trip to England. Due to Joe’s determination, we visited both of these places. What a bittersweet feeling to see remains of these airbases so many years later and to know that my father had actually been there. The history of World War II was becoming more and more meaningful to me.

The following excerpt from The Dynamite Gang tells of my father’s crash and his bravery in combat.

“First missions from St. Quentin began on September 13, the day after the 367th’s arrival, with fighter sweeps to Frankfurt and Cologne. Supply shortages hindered the group on these and many subsequent missions during the remainder of the month. Machine gun and cannon ammunition and high octane aviation fuel became harder and harder to get.

While the 367th suffered these and other less critical shortages, the pilots did their best to see that nothing at all got through to German front line troops. All three squadrons hit enemy fuel and ammunition dumps near Koblenz (Germany) on September 15, and after bombing, the 392nd went down to strafe some trucks in its target area. As usual, Lieutenant Ray E. Jackson pressed his attack so low that he practically scraped his P-38’s belly on the treetops. Seeing a huge explosion on the ground, one the other pilots exuberantly radioed, “Jackson, I don’t know what you hit, but you sure hit something!” Then another voice broke in: “That was Jackson.”

No one knew exactly what happened. He might have hit the ground on another of his daisy cutting firing passes, or flak might have knocked him down. Another pilot thought he hit some power lines just before his plane went in.

Jackson was another of the original members of the 392nd, a fast-diminishing fraternity. From the squadron’s earliest days in action, he amazed everyone with his combination of aggressiveness and phenomenal luck. Four times he brought his plane home with battle damage that had his ground crew and other pilots shaking their heads in disbelief. Back in June, he flew through a tree while strafing a power station, and returned to Stoney Cross with foliage trailing in the slipstream. A week later he returned from an armed reconnaissance with more than thirty flak holes in his plane. As he and his ground crew paced slowly around the sieved machine, he pointed out a rip in his flight jacket. A shell fragment had come through the cockpit floor, torn through the sleeve of his jacket, and blasted away part of the canopy inches from his head.

‘I was sure I had lost my left arm when that flak hit,’ he said. ‘I looked at my jacket, and saw that it was torn in the arm. For a minute, I was afraid to flex my fingers, but finally decided to try a finger or two and found that I could move them. I felt a hell of a lot better.’ He received treatment for multiple lacerations, and so did his plane.

These incidents were typical of Jackson’s hell-raising approach to combat. It was all out or nothing, and he often pressed his attacks so low that he picked up mud splashes, spots of blood, and bits of foliage. He had come to fight, and exemplified the zeal for combat that every fighter pilot must have. He had almost completed his tour of duty when he was killed, and would have returned home within a few days. 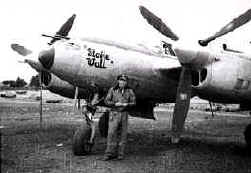 After his contact with my mother, I corresponded with Clyde Deavers. In July 1987, he wrote that a reunion of the 367th Fighter Group was to be held in Colorado Springs in August of that year. He invited Joe and me to attend. We met Clyde and his wife, Jean, and have kept in touch over the years.

In April of 1995, I again received a letter from Clyde Deavers with some phenomenal news. Clyde had answered a request

for information in the P-38 National Association newsletter from a P-38 pilot in Ft. Pierce, FL, on behalf of a German correspondent for pictures, if possible, of 1st Lt. Ray Edward Jackson, (0756596) who was killed in action on September 15, 1944, and who was buried in Greenwood Cemetery, Canton, IL. A young German man, Hans-Gunther Ploes, who was born and raised in the village of Traben-Trarbach, had done an incredible amount of research about all WWII planes that had crashed near his village. Clyde corresponded with Hans and sent me some of the information that Hans had uncovered.

The MACR report had listed my father’s crash site as “1 mile southeast of Zell”. The MACR was in error. On September 2, 1990, Hans had found the actual crash site on the slope of a steep ravine near the village of Bernkastel which is just across the Mosel river from Traben-Trarbach.

The target for the mission on September 15, 1944, was Traben-Trarbach. The flight of P-38’s made one pass on Traben-Trarbach then flew straight across a hill to Bernkastel where they first tried to strafe a bridge but upon seeing trucks standing in a ravine attacked the trucks instead. Not getting a chance to fire on the first pass, they made a second pass. On this pass, my father’s P-38 apparently hit some treetops. Hans, who had studied in depth all aspects of the P-38, suspects that my father’s left engine stopped and while trying to keep the plane under control he flew into the opposite slope of the ravine.

Using a metal detector, Hans found many parts and twisted sheet aluminum from the P-38. The most amazing item found was a propeller blade buried under the dirt. It was still intact with only a bend on the tip end. One personal item, a badly corroded pocket knife, was also found.

Again, as if part of a broader plan, when I received this letter from Clyde in April of 1995, Joe and I had already purchased tickets to Germany for that July. We were going to visit some German friends. After receiving the letter from Clyde, I contacted Hans and made arrangements to meet him at his home in Traben-Trarbach. He showed us all the records, both German and American, that he had obtained about my father’s crash. In his detailed research, he had even interviewed an actual eyewitness to the crash, a German who at that time was a small boy working in a field on a hilltop opposite the one where my father crashed. Hans introduced us to this man and accompanied all three of us to the hill from where the crash was observed. With Hans interpreting, the German gentleman described the events as he witnessed them that day. It was almost like reliving a day in history but instead of it being about some unknown person about whom one normally reads in history books, the person involved in this historic event was my father. Then Hans took us into the forest to the actual site of the crash so many years ago. Even that day his metal detector still found pieces of the broken plane. Hans gave me a few pieces of the twisted metal he had found as well as the pocket knife, even though we all knew it may have been dropped by someone who had originally found the crashed plane.

From German records, Hans had found my father’s place of burial in a Catholic cemetery in Bernkastel. We visited the cemetery and from the records feel that we located the grave that must have been his before his body was disinterred and moved to St. Avold, France. After so many years, more details surrounding my father’s death came to light than had ever been known. My mother had tried for several years after his death to learn more about the circumstances of his crash but did not find out nearly as much as Hans had uncovered. Finally learning these things gave her a sense of closure and finality for which she had been inwardly searching for over fifty years.

Joe and I had expressed an interest in having the propeller blade but Hans did not want to give it up unless it could be replaced by another P-38 propeller blade. Upon return to the states, I checked into where one might be obtained but decided it would be too difficult and too expensive a task and so committed myself to have just a picture of the blade.

In the spring of 1998, Joe and I had once again planned a trip to Germany to visit our German friends. In May, I received another letter from Hans. He had decided his studies at the university were taking up too much of his time and the time he was able to spend on his avocation, researching the planes downed near Traben-Trarbach, was diminishing as well as was the space in his basement to store all of the artifacts. He offered to give me the propeller blade for just the cost of shipping it back to the USA. Since we were going over anyway, Joe decided we should take a ski bag and bring back the propeller blade ourselves, which is exactly what we did …with many disgruntled looks and grumbles from baggage handlers along the way! 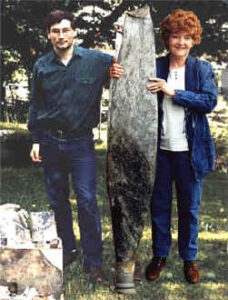 affected by its purpose and final disposition. One cannot begin to comprehend the complexities of “fate” that take us from one place to another in the course of our lives but I have come to believe that we humans are all connected somehow in this universe and that we must all unite in mind, spirit, and actions before the tragedies and heartbreak of war can be eliminated. Let’s pray that this happens soon.