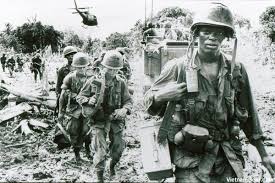 Between 1945 and 1954, the Vietnamese fought the fight for freedom against France, backed by $2.6 million U.S. dollars. A peace conference brought this initial war to an end resulting in Vietnamese independence, but a divided nation: the communist North and the anti-communist South.

By 1958, a bloody battle had broken out between the two sides and American troops were sent in to support the South's government. By 1963, nearly 16,300 U.S. military officers were on the ground in Vietnam. As the South lost critical battles in the war, the U.S. continued to send in troops and began launching air strikes on North Vietnam per President Lyndon Johnson's orders. This operation was known as the Tet Offensive. There were now over 536,000 U.S. military forces on the ground in Vietnam.

In 1968, President Richard Nixon took office, implementing Vietnamization: withdrawing American troops from the region and putting greater responsibility on South Vietnam to fight the war. An order from Nixon to attack Communist bases in Cambodia violated Cambodian neutrality and sparked massive protests back home in the U.S. between the anti-war 'Doves' and the pro-war 'Hawks'.

In 1973, after five years of negotiations, an agreement was reached. U.S. forces were withdrawn from Vietnam and U.S. POW's were released. In April of 1975, South Vietnam surrendered to the North, and the country was reunited.

The Vietnam War was an extremely costly war for the United States resulting in over 58,000 American deaths. Below are the Military members that received the Medal of Honor during the Vietnam War. 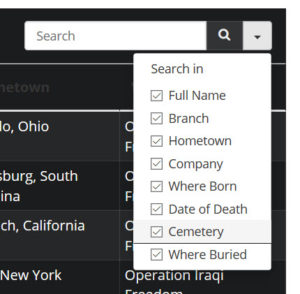 Each recipient's story includes a photo (where available) and the full citation.

You are able to search each group by: