The Silver Star Medal is the United States' third-highest award exclusively for combat valor and ranks fifth in the precedence of military awards behind the Medal of Honor, the Crosses (Distinguished Service Cross/Navy Cross/Air Force Cross), the Defense Distinguished Service Medal (awarded by DOD), and the Distinguished Service Medals of the various branches of service. It is the highest award for combat valor that is not unique to any specific branch; it has been bestowed by the Army, Navy, Marine Corps, Air Force, Coast Guard, and Merchant Marines. It may be given by any one of the individual services to not only their own members, but to members of other branches of service, foreign allies, and even to civilians for "gallantry in action" in support of combat missions of the United States military. 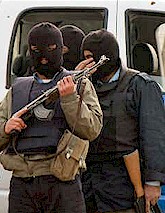 From 1983 to 1992, twenty-one members of the U.S. Army, Navy, and Marine Corps were killed while serving in covert actions as military advisors in El Salvador. Because their involvement in the conflict with pro-Cuban, Marxist forces was highly classified and denied at all levels of government, the sacrifice of these and others who served in El Salvador went un-recognized until 1998 when, at last, these American heroes were recognized for their service under combat conditions. One of these heroes was posthumously awarded the Silver Star.

*FRONIUS, GREGORY A. (KIA)
Citation:
The President of the United States takes pleasure in presenting the Silver Star Medal (Posthumously) to Gregory A. Fronius, Staff Sergeant, U.S. Army, for conspicuous gallantry and intrepidity in action while serving with the 3d Battalion, 7th Special Forces Group (Airborne), in El Salvadore, on 31 March 1987. On that date, pro-Cuban guerrillas of the Marxist group Farabundo Marti National Liberation Front launched a well-planned, early morning attack on the base camp at El Paraiso, El Salvador. Staff Sergeant Frontius, an advisor serving at that base camp, rallied the defense in action that resulted in many casualties among the attacking forces, before he was himself mortally wounded. His actions were in keeping with the highest traditions of the military forces of the United States and reflect great credit upon himself and the United States Army.
Home Town: Greensburg, Pennsylvania