The Silver Star Medal is the United States' third highest award exclusively for combat valor, and ranks fifth in the precedence of military awards behind the Medal of Honor, the Crosses (Distinguished Service Cross/Navy Cross/Air Force Cross), the Defense Distinguished Service Medal (awarded by DOD), and the Distinguished Service Medals of the various branches of service. It is the highest award for combat valor that is not unique to any specific branch; it has been bestowed by the Army, Navy, Marine Corps, Air Force, Coast Guard, and Merchant Marines. It may be given by any one of the individual services to not only their own members, but to members of other branches of service, foreign allies, and even to civilians for "gallantry in action" in support of combat missions of the United States military. 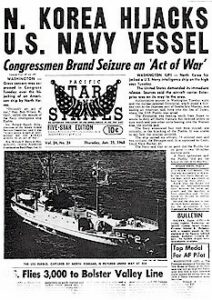 On January 23, 1968, the U.S.S. PUEBLO (AGER-2), an American intelligence-gathering ship, was attacked in International Waters by North Korean naval vessels and MiG jets. It was the first U.S. Navy ship thus boarded and seized on the high seas in more than 150 years. During the attack, one American was killed and several were wounded. The eighty-two surviving crew members were captured along with their ship, and were taken taken into port at Wonsan, North Korea. Subsequently, the crew was moved twice to POW camps, with some of the crew later reporting that they had been starved and regularly tortured while in North Korean custody.

Exactly 11 months after the Pueblo was captured, on December 23, 1968, the crew was taken by buses to the DMZ border with South Korea and ordered to walk south across the "Bridge of No Return". Commander Pete Bucher, Captain of the Pueblo, led the long line of crewmen, followed at the end by the Executive Officer, Lieutenant Ed Murphy, the last man across the bridge. The U.S.S. Pueblo remains a commissioned ship in the U.S. Navy, despite the fact that it continues to be held by the North Koreans in violation of International Law.

*HODGES, DUANE (KIA)
Citation:
The President of the United States takes pride in presenting the Silver Star Medal (Posthumously) to Duane Hodges, Fireman, U.S. Navy, for conspicuous gallantry and intrepidity in action on 23 January 1968 which serving on board U.S.S. PUEBLO (AGER-2) during the unwarranted attack upon and illegal seizure of that vessel in international waters in the Sea of Japan by North Korean naval and air force consisting of two patrol boats, four torpedo boats, and two aircraft. When PUEBLO came under fire from these North Korean units, Petty Officer Hodges rendered invaluable assistance in the face of the intense hostile fire while participating in the unfamiliar task of destroying classified materials. Mortally wounded while carrying out this assignment, Petty Officer Hodges, by his courage, initiative, and inspiring dedication, he reflected credit upon himself and upheld and enhanced the highest traditions of the United States Naval Service.
Born: September 5, 1946 at Creswell, Oregon
Home Town: Creswell, Oregon

SCHUMACHER, FREDERIC CARL (POW)
Citation:
The President of the United States takes pleasure in presenting the Silver Star Medal to Frederic Carl Schumacher, Lieutenant [then Lieutenant Junior Grade], U.S. Navy, for conspicuous gallantry and intrepidity in action on 23 January 1968 which serving on board U.S.S. PUEBLO (AGER-2) during the unwarranted attack upon and illegal seizure of that vessel in international waters in the Sea of Japan by North Korean naval and air force consisting of two patrol boats, four torpedo boats, and two aircraft. When the U.S.S. PUEBLO came under heavy fire from these North Korean units, Lieutenant Schumacher, as Operations Officer, repeatedly exposed himself to the intense fire while organizing and providing the necessary supervision to ensure the destruction of all classified materials under his purview. Through his inspiring leadership, courage, and dedication in the face of hostile fire, he reflected great credit upon himself and upheld the highest traditions of the United States Naval Service.
Home Town: St. Louis, Missouri

We estimate the number of Silver Stars awarded for World War I to Present is between 100,000 and 150,000. You will find recipients of the Silver Star listed alphabetically on our website within conflict.

Home of Heroes continues to update our website content. Our Major Military Awards List is a resource that can help you find a recipient of a major award. This information is provided in a PDF document which enables you to search the content by several terms - name, branch of service, war/conflict.