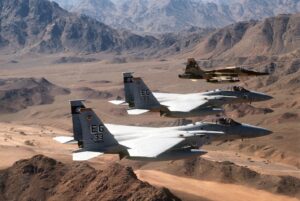 The Persian Gulf War (2 August 1990 – 28 February 1991), code-named Operation Desert Shield (2 August 1990 – 17 January 1991) for operations leading to the buildup of troops and defense of Saudi Arabia and Operation Desert Storm (17 January 1991 – 28 February 1991) in its combat phase.  On August 2, 1990, President George H.W. Bush ordered the invasion of Kuwait. Hussein’s assumption that his fellow Arab states would stand by in the face of his invasion of Kuwait, and not call in outside help to stop it, proved to be a miscalculation.  On January 17, 1991, a massive U.S.-led air offensive hit Iraq’s air defenses, moving swiftly on to its communications networks, weapons plants, oil refineries and more. The coalition effort, known as Operation Desert Storm, benefited from the latest military technology, including Stealth bombers, Cruise missiles, so-called “Smart” bombs with laser-guidance systems and infrared night-bombing equipment. Though the Gulf War was recognized as a decisive victory for the coalition, Kuwait and Iraq suffered enormous damage, and Saddam Hussein was not forced from power.  There were 125 American soldiers killed in the Persian Gulf War and an additional 21 soldiers were deemed missing in action.