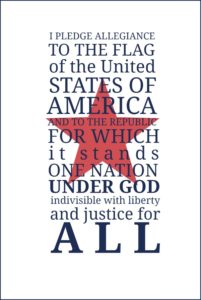 On September 8, 1892, a Boston-based youth magazine "The Youth's Companion" published a 22-word recitation for school children to use during planned activities the following month to commemorate the 400th anniversary of Columbus' discovery of America. Under the title "The Pledge to the Flag", the composition was the earliest version of what we now know as the Pledge of Allegiance.

October 12, 1892, the Columbus Day celebration for the 400th Anniversary of America's discovery was planned years in advance.  The United States had recovered from most of the effects from its Civil War that began 30 years earlier, and people from around the world were flocking to the "Land of Opportunity." The previous year, almost a half-million immigrants had entered the United States through the Barge Office in Battery Park, New York, and on New Years' day of 1892, the new Federal Bureau of Receiving's station at Ellis Island had opened. 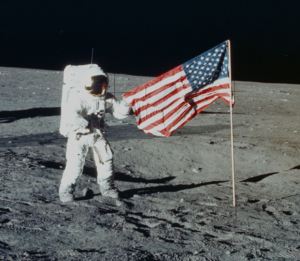 Two men, Francis Bellamy and James Upham planned Columbus Day celebrations around our Nation's 44 states. To this day, it is still unknown which of the two men actually authored the words that were to become the Pledge of Allegiance. It was published anonymously and was not copyrighted.

James Upham was an employee of the Boston publishing firm that produced "The Youth's Companion" in which it first appeared. Francis Bellamy was an educator who served as chairman of the national committee of educators and civic leaders who were planning the Columbus Day activities. What we know for certain is that the words first appeared in the September 8, 1892 issue of "The Youth's Companion", and a month later more than 12 million school children recited the words for the first time in schools across the nation. Our Pledge of Allegiance was born, but like anything new, it took many years to reach maturity and underwent several changes along the way. The original Pledge was written as:

I pledge allegiance to my Flag,
and to the Republic for which it stands:
one Nation indivisible,
With Liberty and Justice for all.

After the Columbus Day celebration, the Pledge to the Flag became a popular daily routine in America's public schools but gained little attention elsewhere for almost 25 years. Finally, on Flag Day - June 14, 1923, the Pledge received major attention from adults who had gathered for the first National Flag Conference in Washington, D.C.

Here, their Conference agenda took note of the wording in the Pledge. There was concern that with the number of immigrants now living in the United States, there might be some confusion when the words "My Flag" were recited. To correct this, the Pledge was altered to read:

I pledge allegiance to the
Flag of the United States,
and to the Republic for which it stands:
one Nation indivisible,
with Liberty and Justice for all.

The Pledge of Allegiance continued to be recited daily by children in American schools and gained popularity among adults during the patriotic fervor brought on by World War II. It was still an "unofficial" pledge until June 22, 1942, when the United States Congress included the Pledge to the Flag in the United States Flag Code (Title 36). This was the first official sanction given to the pledge that had been recited each day by children for almost fifty years. One year after receiving this official sanction, the U.S. Supreme Court ruled that school children could not be forced to recite the Pledge as part of their daily routine.

In 1945, the Pledge received its official and final title; the Pledge of Allegiance.

The last change in the Pledge of Allegiance occurred on June 14, 1954 - Flag Day - when President Dwight D. Eisenhower approved adding the words "under God." As he authorized this change he said:

"In this way we are reaffirming the transcendence of religious faith in America's heritage and future; in this way we shall constantly strengthen those spiritual weapons which forever will be our country's most powerful resource in peace and war."

This was the last change made to the Pledge of Allegiance. The twenty-three words that were initially penned for a Columbus Day celebration, now comprised of thirty-one-words professing loyalty and devotion to not only a flag but to a way of life...the American ideal.