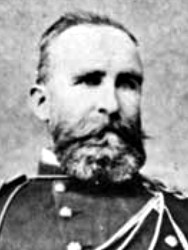 The President of the United States of America, in the name of Congress, takes pleasure in presenting the Medal of Honor to First Lieutenant (Cavalry) William Russell Parnell, United States Army, for extraordinary heroism on 17 June 1877, while serving with 1st U.S. Cavalry, in action at White Bird Canyon, Idaho. With a few men, in the face of a heavy fire from pursuing Indians and at imminent peril, First Lieutenant Parnell returned and rescued a soldier whose horse had been killed and who had been left behind in the retreat.