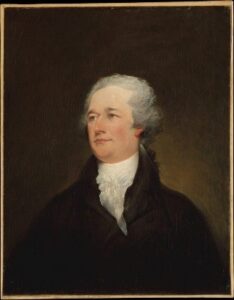 He first gained notice by George Washington during the New York and New Jersey Campaign. Washington recognized Hamilton’s fiery demeanor, command or organization, and fidelity to the cause. By March 1777, Hamilton had become firmly entrenched as one of Washington’s intimate military family. He became an aide-de-camp and was promoted to lieutenant colonel. Like his French counterpart Lafayette, Hamilton and Washington assumed a father-son relationship. Not suited for desk work, Hamilton yearned for a combat command and played a pivotal role during the Siege of Yorktown where he led the successful American assault on British Redoubt #10.