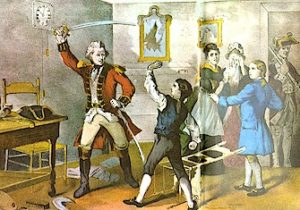 Andy wasn't the toughest kid on the block, just the most persistent. One of his schoolmates had once said, "I could throw him three times out of four, but he would never stay through. He was dead game and never would give up."

It was a telling statement that characterized the life of a young boy who never gave up. By the time he was fourteen he was a war veteran who had been wounded in action, a former prisoner of war, and an orphan. Both brothers were dead and he was all that remained to carry a family tradition. His soul bore many scars but no scar so prominently told the story of the boy who would never quite like the scar on his brow. It was Andy's badge of freedom.

Robert shivered with the early spring chill as he huddled in a thicket deep in the South Carolina swamp. He was exhausted, he was scared, he was hungry, and he was tired of war. At only fifteen years of age, he had seen enough death and suffering to last a lifetime. Only a year earlier, the British soldiers had marched into the Waxhaw to defeat the patriot resistance. They had left behind 113 dead patriots, another 130 wounded. Robert, his mother, and his younger brother had worked for days to save the wounded in the old log meeting house that had been converted into a hospital. It was amazing that any of the patriot militia had survived. The British commander, Sir Banastre Tarleton, was known throughout the Carolina's as "The Butcher" for his savage, scorched-earth manner of making war. The battle in the Waxhaw came to be called a massacre. Indeed it had been.

A stir in the thicket reminded Robert that he was not alone. His younger brother huddled there as well, and Robert may have felt a paternal concern for the 13-year old. After all, at his own young age, Robert was the "man of the family". Their father Andrew had died back in 1767, just a few days before Robert's youngest brother had been born. Their mother Elizabeth had named the infant Andrew, after his late father. Hugh had been the oldest of the three sons, two years older than Robert. But Hugh had been gone for almost a year, and he wouldn't be coming back. He had died shortly after the Battle of Stono Ferry the previous summer.

The boys were more, however than casualties of war. They were veterans. Both had fought the invading British and marauding Tories. Young Andrew had even been a part of Colonel William Richardson Davie's cavalry at the Battle of Hanging Rock the previous August. Now the two boys were on the run, hiding from the soldiers that had surprised the gathering of patriots the previous night. They were fortunate. More than a third of their small band of the militia had been captured.

As morning dawned the two young soldiers set out in search of food. They approached the friendly home of Lieutenant Crawford after leaving their horses and muskets hidden in the thicket. As the Crawford family prepared a meal for the two hungry boys, local Tories found their horses and notified the British. Suddenly, without warning, the enemy swarmed upon the Crawford house. The doors were sealed and a violent search of the home began. The invaders held the two boys prisoner, then ransacked the house with total abandon. Glass was shattered, furniture destroyed, and the family's clothes were ripped and scattered about as the soldiers vented their hatred of the upstart American patriots. Then the dragoon commander walked up to the youngest of his two prisoners. Looking down at the swamp mud he had tracked in, he ordered, "Boy, clean my boots."

Young Andrew Jackson drew himself up to his full adolescent height, looked the officer in the eyes, and replied, "Sir, I am a prisoner of war, and claim to be treated as such." The refusal of the small boy so angered the commander he drew his sword and swung it at the upstart lad. Quickly Andy raised his arm to protect himself. The sword bit into flesh, cutting his forearm to the bone and then continuing to slash a long furrow across his forehead. Andy was fortunate he had not been decapitated.

Quickly the officer turned to the elder brother. "Then you clean my boots!" When, like his younger brother, Robert refused to be humiliated, the sword sliced through the air once again. The blow caught him on the head, causing a serious wound.

Their wounds untreated, Robert and Andy were placed with 20 other prisoners and taken forty miles to the British prison camp at Camden. There they were housed with 250 other prisoners. Their prison was the most rudimentary. Beds were non-existent, food was almost as scarce, and the British jailers couldn't be bothered with such details as treating wounds or illness. Smallpox ravaged the prison population and young Andy's 14th birthday passed to the cries and pleadings of men who were beyond hope. Among them was his brother Robert. In addition to the infection that set into his untreated head wound, Robert contracted smallpox.

One small ray of hope appeared late in April when General Greene's forces camped on Hobkirk's Hill, within view of the prisoners. But hope vanished on April 25th when the British surprised the small force and over-ran the hill. Robert was by now on his death bed, young Andy nearly as critical. Unless something happened, both boys, like their oldest brother Hugh, would be casualties of the War for Independence.

It was the appearance of their mother that saved the day. The British had arranged to exchange some of their prisoners for 13 British soldiers held by the Patriots. Elizabeth had learned the fate of her two remaining sons and come to Camden to check on their welfare. She was totally unprepared for what she found, two living skeletons, malnourished, sick, and suffering an infection from the still untreated wounds inflicted by the dragoon officer's sword weeks earlier. She successfully argued for their release, then began the journey home. Robert was so ill that he could not even ride home on horseback without his mother's support. Barefoot and with no jacket, Andy had walked the full 45 miles next to her side. Before the trip ended a violent rainstorm soaked the refugees, perhaps the final blow to Robert's chances of survival. The trio made it back to their home in Waxhaw, Elizabeth tucked the broken bodies of her two young sons into bed, and began to nurture them back to life. Despite her best efforts, two days later Robert died.

With Andy out of danger, Elizabeth became concerned for other young boys suffering fates similar to her own sons'. A nephew was a prisoner of war near Charleston, and Elizabeth joined several Patriot women from Waxhaw in the 160-mile trip to their aid. The war was slowly turning in favor of the new United States of America, and as it entered its final stages it was evident many of these mistreated, malnourished, disease-ridden prisoners would not live to see the victory they had paid so dearly for. Elizabeth and the other women gained entry to the prison ships where they did their best to nurse the ailing prisoners back to health. In the end, Elizabeth herself was afflicted with cholera. Shortly after General Cornwallis surrendered at Yorktown, Elizabeth died and was buried in an unmarked grave in Charleston. Her few possessions were sent back to Waxhaw, a message to Andy that his mother, like his brothers, had given her life in the battle for freedom.

With the surrender at Yorktown, Andy and his countrymen were free. But it was not without a great price. The soul of a fourteen-year-old boy who would never give up carried scars that could never be healed. Likewise, the scar in his forehead, inflicted by an officer angry that a young American boy refused to bow to him, became a permanent reminder of that fateful day. For the rest of his life, Andy wore that scar with pride. Almost 50 years later, an older Andy stood on the steps of the United States Capitol Building, his unruly hair swept back from his high brow, the white scar from a British officer's sword gleaming in the sunlight as he was sworn in as the 7th United States President. The son of Andrew and Elizabeth Jackson was indeed the boy who would never quit, and that scar was his own badge of freedom.