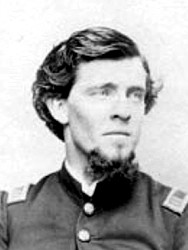 The President of the United States of America, in the name of Congress, took pleasure in presenting the Medal of Honor to Captain Marion T. Anderson, United States Army, for extraordinary heroism on 16 December 1864, while serving with Company D, 51st Indiana Infantry, in action at Nashville, Tennessee. Captain Anderson led his regiment over five lines of the enemy's works, where he fell, severely wounded.