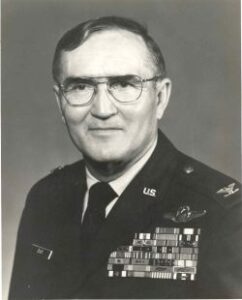 George E. Day was a 41-year-old Veteran of combat in World War II and Korea as he flew yet another mission in his third war, Vietnam, that August morning in 1967. At first, the mission seemed no different than any of the countless others he had flown. Suddenly an enemy rocket slammed into his F-100, destroying the aircraft and setting in motion a chain of events that would turn into a nightmare… one that would last for the next six years.

As Major George Day ejected from the battered aircraft, his body slammed into its fuselage, breaking his arm in three places and badly spraining his left knee. Perhaps the only stroke of fortune for him that day was that his parachute opened. Upon reaching the ground he was immediately captured and severely beaten. The torture continued for two days during most of which Day was hung upside down with ropes. Finally, an enemy medic crudely set his broken arm, and the torture let up slightly. So severe were his injuries and so swollen was his left knee that Day’s captors considered him incapable of resistance of escape and only loosely bound him for three more days in a damp cave. On the sixth night, Day escaped. Barefoot and injured, he traveled south for two days, both feet repeatedly cut by sharp rocks and battle debris. Later, he would recount the sounds of his pursuers and their dogs all around him day and night, but through the great will to survive he managed to stay one step ahead of them.

On his second night of freedom, unable to continue without rest, the 41-year-old pilot sought refuge under a bush. His fitful sleep was suddenly shattered by the nearby explosion of a rocket or bomb, he never knew which. The detonation was so close it threw his body into the air and ruptured his eardrums and sinuses. Shrapnel ripped into his right leg cutting large, open wounds. Vomiting blood, disoriented and with no equilibrium, Major Day languished in the brush for two more days. Then he resumed his trek south to what he hoped would be freedom.

For several days’ meager meals of berries, as well as two frogs swallowed alive, provided the sustenance he needed to continue. After more than a week of struggle, Day finally reached the Ben Hai River Marking the boundaries of the Demilitarized Zone. Hiding from enemy patrols during the day, he left the cover of the jungle that night and used a bamboo log to float across the river and into “no-man’s-land”. For another week, he avoided enemy patrols and several times came heartbreakingly close to attracting the attention of American helicopters and reconnaissance airplanes. With unbelievable strength of character, he continued south in hopes of reaching an American patrol that had ventured into the zone.

Somewhere between his 12th to 15th day of escape, he began to hear the nearby sounds of American artillery and helicopters. During the darkness of night, he continued until the basecamp was in sight. Not wanting to approach the friendly fortress during the darkness that might make the defenders mistake him for an enemy, George E. Day laid down in the jungle to await the dawn. Shortly before the sun arose to afford him rescue, he looked up to see a North Vietnamese soldier pointing an AK-47 rifle at him. Attempting to escape yet again, Day was shot in his left hand and thigh. A day and a half later, he was recaptured and returned to his original prison camp.

Refusing medical treatment, Day’s gunshot wounds festered and became infected. He was tortured for 48 hours without rest before the enemy finally believed they had broken his will. George Day had answered their questions. What they didn’t realize was that the man who appeared so broken on the outside had answered every important question with false information. Two months later, totally destroyed physically, Day was sent north to the infamous Hoa Lo prison camp, where further torture continued.

Most Americans are already aware that conditions at the “Hanoi Hilton” were barbaric. American prisoners faced isolation, humiliation, and torture that lasted for year after year. As the war in Vietnam came to a close, however, the North Vietnamese captors realized that the release of American P.O.W.’s was imminent and relaxed their vigil. American P.O.W.’s responded by becoming more daring in their resistance.

In February 1971, several American prisoners at the Hoa Loa camp gathered for a forbidden religious service. Suddenly, they were interrupted by the enraged enemy guards. As the guards burst into the meeting room with rifles pointed at the prisoners, one of the Americans stood to his feet. Ragged, battered but unbroken, it was George Day. Looking into the muzzles of the enemy rifles, he began to sing. The song was “The Star-Spangled Banner”, our National Anthem. Next to him, another prisoner stood. Commander James Bond Stockdale was the ranking American in the prison, and he lent his voice to Day’s anthem of freedom. Soon the other prisoners joined the refrain, and then from throughout the entire prison camp, came the sounds of others. Stockdale, who would join “Bud” Day in receiving Medals of Honor five years later wrote that, although he was punished for the episode, it was exhilarating: “Our minds were now free and we knew it.”