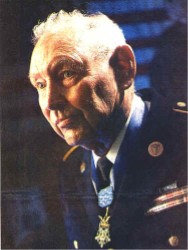 The kindly old janitor neatly tucked the mop and brooms back into the closet, reached up briefly to brush a drop of sweat from his wrinkled brow, then closed the door to the tools of his trade for another evening. Slowly he walked across the polished floor towards the exit that would take him to the parking lot, where his old but reliable car would transport him to the modest house he had built in the foothills near the U.S. Air Force Academy.  To the casual observer, the janitor was just another ordinary guy, putting in his time at the job that supplemented his retirement income and spending his free time working in the garden he loved.

As he walked through the hallway he had just spent his afternoon cleaning and polishing to military perfection, the "cream of the crop" of America's youth noted his passing.  "Have a good evening, Mr. Crawford," they would say as he passed.  He'd nod back with a smile.  Young enough to be his own children, idealistic and patriotic enough to share his kindred spirit, he thought of them as his adopted kids.  To them, he was more than just a janitor, he was a second father.  And through the long months of study to become officers in the United States Air Force, as they came to know Bill Crawford better, he also became their hero.  He was an "every-day" kind of guy, doing an "every-day" kind of job, but none would ever consider him "ordinary".

The fact that Bill Crawford had spent time in the military was obvious almost immediately upon meeting him.  The way he carried himself, the way he spoke, and the manner in which he went about his job, would quickly mark him as "retired military".  Though his role at the Air Force Academy was to clean the floors and perform the most menial of tasks, his personable nature and tendency to look out for the cadets, marked him as having been a Non-Commissioned Officer during his years of service.  Indeed, Bill Crawford had retired from the United States Army as a master sergeant, after 20 years of service.  He was old enough to be a World War II veteran, but he didn't tell war stories in those times when he took a few moments from his duties to visit with the cadets.  Instead, he talked of growing up in nearby Pueblo.

Life hadn't been easy for young Bill Crawford, but he had learned to cope. Shortly after his birth on May 19, 1918, Bill's mother passed away. His father, George Crawford, found it difficult to both work and raise his family, which included Bill's older brother and two sisters. Caring relatives took them in and raised them through their teens. Bill saw his father only occasionally, the elder Crawford working long hours to provide support where he could, and struggling to live beyond the grief that had torn his life apart at losing his wife.

The children did remarkably well, learning to mix recreation and responsibility.  Young Bill's first job was delivering groceries for a local neighborhood grocery store.  He also delivered newspapers for "The Pueblo Star-Journal."  For recreation, the slender but wiry youth began boxing.  He did remarkably well, boxing Golden Gloves and becoming a champion.  In school, he worked hard, graduating from Pueblo Central High School in 1936.

"Of course, I wasn't always a good kid," Bill would say with a mischievous twinkle in his eyes.  "I used to love to wait for the trolley car to stop to pick up passengers, then disable it while they were boarding, and watch the conductor's frustration when he couldn't get it moving again."  Bill would pause for a minute, then quickly add, "But you know...even when I pulled those teenage pranks, I never tried to hurt anyone...except in the boxing ring."

From time to time, one of the cadets would ask Mr. Crawford if he had ever boxed professionally.  "Naw," he would say.   "I probably could have, but the war (World War II) came along and interrupted my plans."  And that would be about all Bill would say about his war service.

Bill Crawford was a genuinely nice guy, a comforting father figure to incoming cadets, and an interesting person to visit with.   "I met the janitor today," a new cadet might say to another cadet somewhere in the course of their first year at the Academy.

"Nice guy, isn't he," the second cadet would answer.

"Yes, and very interesting.   Did you know he used to box Golden Gloves?

"Oh yeah.  He was a local champion.  Does that surprise you?"

"Doesn't seem to be the 'fighter-type'?  Didn't you know?

"That janitor wears the Medal of Honor!"