Burial Flags - A Final Salute to the Defenders of Freedom

Retired Major General Arthur MacArthur (father of General Douglas MacArthur) stood before the 60 surviving members of his old Civil War unit, the 24th Wisconsin Infantry. On the wall behind him was a special flag, aged and battle-torn.  It was the original battle flag of the 24th Wisconsin. Almost 50 years earlier, as a young Union Lieutenant, MacArthur had valiantly carried that flag up Missionary Ridge. For his heroism that day, he had been awarded the Medal of Honor. On this night as he stood before his comrades, Arthur MacArthur was to give the keynote address. He stood, spoke three words, and collapsed to the floor.  With his remaining fellow soldiers gathered around him, Arthur MacArthur drew his last breath.  Edwin Parsons, the adjutant for the veterans in the group, looked up from the body of MacArthur to the flag, stood to his feet, and as the minutes of that meeting recorded, "took from the wall the battle-torn flag he (MacArthur) had so gallantly carried, and wrapped it around MacArthur." 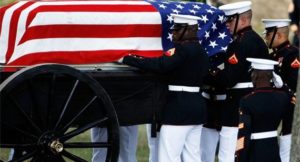 More than 40 million American men and women have defended freedom in the uniform of our Military Services. The red, white, and blue of the American Flag covering their casket upon death, is a final tribute to the men and women who have secured the blessings of liberty. Though the privilege and tribute are not reserved exclusively for veterans (flags also drape the caskets of government officials and others of import), it is a special tribute the family of every veteran should be aware of and take advantage of.

The U.S. Department of Veterans Affairs (VA) issues almost a half-million burial flags drape the caskets of deceased veterans each year. Any honorably discharged veteran is entitled to a burial flag which, upon internment, is folded and presented to the family as a keepsake. Only one burial flag may be provided per veteran. Usually, these details can be handled by the funeral director; however, every veteran, and the family of every veteran, should be aware of this special provision. Appropriately, this is one of the few governmental actions that can be done with a minimum of "red tape" and paperwork. A burial flag may be obtained from most post offices after filling out a simple, single-page form, VA Form 2008, and verifying the Veteran's status with discharge papers such as a DD-214.

Who is eligible for a Burial Flag? 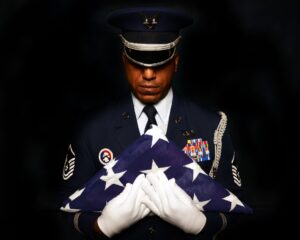 In general, any veteran of military service who has served one enlistment or more or who has served in any war is eligible for a burial flag providing their discharge was not a dishonorable discharge. (Note: You do not have to be a combat veteran to qualify.) Under certain circumstances, burial flags may also be provided for veterans of reserve military duty. These are the general qualifications for a burial flag:

Notes:
a) The phrase "veteran of war" requires a showing that the deceased was in service in the US Armed Forces during a war period. The phrase "Mexican border service" means active service during the period beginning 1/1/1911 to 4/5/1917, in Mexico, on the borders thereof, or in the waters adjacent thereto. The phrase "service after January 31, 1955" relates to veterans with active military, naval, or air service after that date.

c) The phrase "at least one enlistment" is construed to include service of a commissioned officer whose service, computed from date of entrance into the commissioned status to date of separation from service, terminated under honorable conditions, and in all cases, relates to peacetime service before June 27, 1950.

d) When the deceased was honorably discharged for disability, it may be assumed that the disability was "incurred in line of duty".

e) Issue of the flag in in-service cases is required only when the deceased was interred outside the United States, or remains not recovered, or where service department cannot supply flag in time for burial. An explanation should be included on the VA Form 2008 under "Remarks".

The loss of a family member can be a traumatic time, and the Veterans Administration has taken every step to insure the process of procuring a burial flag can be done rather easily. A completed VA Form 2008 can be taken with a copy of the deceased veteran's discharge papers to most VA regional offices or local post offices, where a burial flag will be immediately issued. In the event that you are unable to locate discharge papers, the issuing authority may issue a burial flag without them, provided a "statement is made by a person of established character and reputation that he/she personally knows the deceased" to have qualified under the above criteria.

The burial flag covering the closed casket of a deceased veteran is displayed in alignment with the position of the body, the "Union" (field of blue stars) rests at the head and over the left shoulder of the body of the deceased. Other manners of display include:

Graveside Ceremonies and Display of the Burial Flag 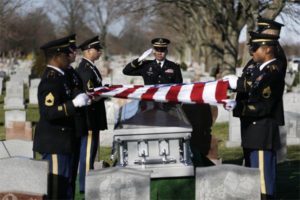 The United States Flag Code specifies that the burial flag should never be allowed to touch the ground, nor is it to be lowered into the ground with the casket. The proper procedure at the conclusion of the graveside ceremony is: The burial flag is lifted waist-high by the pallbearers and held in this position for the playing of "Taps." Upon the conclusion of the playing of "Taps" the flag is properly folded into a triangle. The folded flag is then presented to the deceased veteran's next of kin "On behalf of a grateful Nation." The folded burial flag becomes the property of the Veteran's family, to honor the memory of one who has served the cause of freedom.

The Department of Defense Directive 1300.15, Military Funeral Support, establishes three distinct categories of veterans and the level of military burial honors each category minimally receives. They are:

In many communities, with military resources declining to support funeral details, local veterans have formed "burial details" to render proper honors to their deceased comrades. These dedicated teams are independent of official sanction but are veterans who are concerned with seeing their brothers and sisters in arms properly honored upon death. The level of support they can render varies from community to community, but usually include at the least a "firing team" to render a gun salute, and a representative to present the burial flag. You can contact your local veteran's organizations (VFW, American Legion, GI Forum, Marine Corps League, etc.) to learn if such a detail exists in your location.