Saluting the Flag of the United States

re-spect: v 1) To have deferential regard for; esteem. 2) To treat with propriety or consideration.

pro-to-col: n 1)The rules of diplomatic and state etiquette and ceremony.

RESPECT is a verb, an action. It is important to always show proper respect for the United States Flag.

PROTOCOL defines how we demonstrate our respect for the flag. Much of this is spelled out for us in the Flag Code. 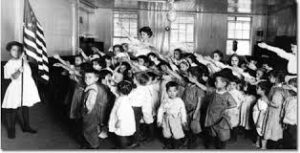 Initially, the pledge was written:
"I Pledge Allegiance to my flag and to the Republic for which it stands......."

Those reciting the pledge usually stood, faced the flag, and recited these words. The "hand salute" was given at the words "my flag", when the right hand was outstretched towards the flag, palm up. 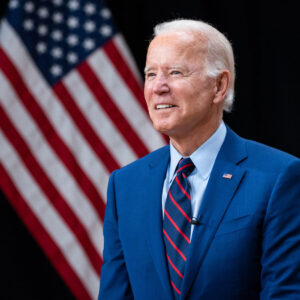 In the early part of this century, written protocol began to be developed for showing proper respect for the flag. It was also during this time that Adolph Hitler came to power in Europe and began his quest to conquer the world. The "seig heil" German salute with the right arm outstretched palm down, became a symbol of tyranny and oppression. As the Flag Code was developing, two major changes also occurred. First, the words in the Pledge of Allegiance were changed, so that the Pledge was rendered to "The Flag of the United States of America" rather than "My Flag". Second, a new hand-salute was introduced less similar to the seig heil. The new salute involved placing the right hand on the left side of the breast, covering the heart, to show our love for the Flag and all it stands for.

The military salute is rendered by men and women in uniform (and may also include boys and girls in the uniform of Scouts, CAPS, ROTC, and others). Those not in uniform salute the flag by standing at attention, tall and straight with the left arm at the side, and placing the right hand over the heart. Men who are wearing a hat should remove the hat with their right hand and hold it over their shoulder. The right hand, not the hat, should rest over the heart.

This salute is presented at several important times:

During these, and other appropriate occasions, the Flag Code establishes the proper protocol to practice in saluting and showing respect for the flag: All persons present except those in uniform should face the flag and stand at attention with the right hand over the heart. Those present in uniform should render the military salute. When not in uniform, men should remove their headdress (hat) with their right hand and hold it at the left shoulder, the hand being over the heart. Aliens should stand at attention.

The Military Salute is rendered by men and women in full uniform (including a "cover" or hat). The salute is given from a position of full attention, standing straight with the left arm at the side, hand against the thigh and the fingertips curled slightly inward. The feet should be placed with the heels together, the toes pointing outward at a 45-degree angle (not together).

The salute is rendered by bringing the right arm up so that the lower part of the upper arm is horizontal from the body at a 90-degree angle, and the forearm is held at a 45-degree angle towards the brow. The thumb and fingers of the right hand are closed comfortably but firmly, the forefinger touching the brim of the cap just to the right of center, palm down. (When uncovered...meaning you are not wearing a hat...the forefinger should be at the top/center of the right eyebrow). Military men and women render the salute with all 4 fingers of the hand extended and parallel. Some organizations, such as Scouts, have different configurations for the fingers in rendering the salute.

The Flag Code states that, when giving the Pledge of Allegiance, "Persons in uniform should remain silent, face the flag, and render the military salute." When the pledge is given, if you see a man or woman in uniform saluting but not reciting the pledge, that is the reason for their silence.