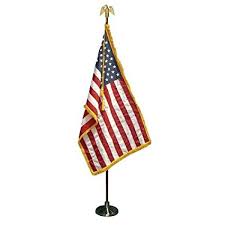 There can be no finer part of "interior decorating" than the proud display of the United States Flag. Schools, churches, auditoriums, stores, just about any inside area is an appropriate place to "Show Your Colors".  Sadly, the United States Flag is no longer a universal fixture in our country's Classrooms.

Displaying the Flag on a Platform 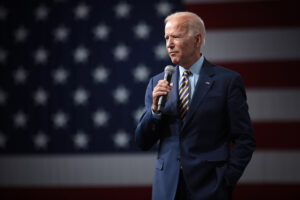 When the flag is mounted on a staff that sits on a platform, the National Colors are placed to the speaker's right (the audience's left), and any other flag(s) similarly displayed on the platform should be to the left of the U.S. Flag. In some occasions, the flags are displayed off the platform and in front of the speaker (making them a part of the audience). In such situations, the position of the U.S. Colors has occasionally been reversed with the National Flag placed to the audience's right. The practice has fallen to general disuse, and such reversal of placement was a matter of custom not specified in the flag code. Should you see such a display, it is not necessarily erroneous.

To avoid confusion, however, we normally recommend the practice of always placing the flag to the speaker's right.

The flag may also be displayed flat against a wall at the head of a room. The important thing to remember about such a display is the position of the Union (blue field of stars). The flag thus displayed should be positioned so that the Union is always to the flag's own right, or to the left of the viewer. If you are not sure, stand in the entrance to the room and look at the flag, making sure that from your position the Union is to your own left-hand side.

Displaying the Flag in a Hall or Corridor 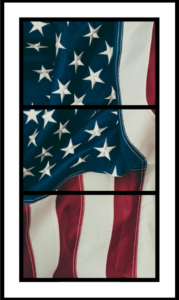 Displaying the Flag in a Window

When the flag is displayed in the window, keep in mind that you are showing your patriotism to people outside your building they are the "audience". This means that the blue field of stars (The Union) should be to the flag's own right when viewed from the street or sidewalk. To make sure you have displayed the flag properly in your window, walk outside and look at it. If the Union is to your left as the observer, your display is properly and correctly done.