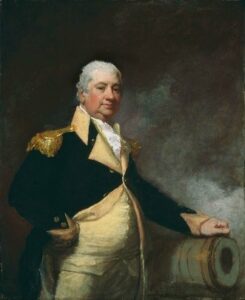 Henry Knox was an American general in the American Revolution and first secretary of war under the U.S. Constitution. During the winter of 1775-76 General George Washington sent him to Fort Ticonderoga, in New York, to bring back captured British artillery there. In a remarkable feat, Knox brought back artillery totaling 120,000 pounds, using oxen, horses, and men to transport the guns over snow and ice 300 miles to Boston. The weapons were used to drive the British from that besieged city and formed the basis for the Revolutionary artillery. He was made a major general and at the end of the war succeeded Washington as commander of the army. Knox resigned his command early in 1784 and returned to Boston. He became secretary of war in the government under Articles of Confederation and was carried over into President Washington's first cabinet.