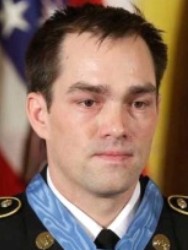 In February 2013, Clinton Romesha, a North Dakota resident, became the fourth living recipient of the Medal of Honor for his actions in Afghanistan, a recognition of his bravery. Army officials say Romesha risked his own life multiple times during the fight to fend off enemy fighters, resupply his fellow soldiers, and protect wounded comrades. In attendance at a White House ceremony were veterans from the 2009 battle and families of the eight men who died that day. Romesha paid tribute to those fallen friends after the ceremony, and President Barack Obama recognized the loss each represented to the team and the country. Only seven men, including Romesha, have been awarded the Medal of Honor for actions in Afghanistan since 2001, and only four have received the award for valor in Iraq. All of the Iraq awards were posthumous.