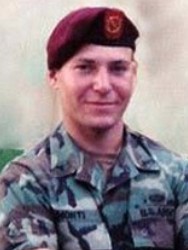 On 21 June 2006, Jared C. Monti served as the assistant leader of a 16-man patrol and leader of a weapons forward observer team tasked with gathering intelligence in Gowardesh, Nuristan Province, in northeastern Afghanistan. That evening, the patrol was attacked by a group of at least 60 insurgents, who had established two positions on a wooded ridge. Monti died that evening after making three attempts to reach Specialist Brian J. Bradbury, after he was severely wounded and left lying in the open between the enemy and the team's position. Jared Christopher Monti was a Staff Sergeant in the U.S. Army who was posthumously awarded the United States military's highest decoration for valor, the Medal of Honor, for his actions in Afghanistan. He was also posthumously promoted to the rank of Sergeant First Class.