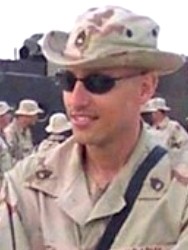 The President of the United States of America, in the name of Congress, takes pride in presenting the Medal of Honor (Posthumously) to Sergeant First Class Paul Ray Smith, United States Army, for acts of gallantry and intrepidity above and beyond the call of duty while serving with Company B, 11th Engineer Battalion (Combat), 3d Infantry Division, in action with an armed enemy near Baghdad International Airport, Baghdad, Iraq on 4 April 2003. On that day, Sergeant First Class Smith was engaged in the construction of a prisoner of war holding area when his Task Force was violently attacked by a company-sized enemy force. Realizing the vulnerability of over 100 fellow soldiers, Sergeant First Class Smith quickly organized a hasty defense consisting of two platoons of soldiers, one Bradley Fighting Vehicle and three armored personnel carriers. As the fight developed, Sergeant First Class Smith braved hostile enemy fire to personally engage the enemy with hand grenades and anti-tank weapons, and organized the evacuation of three wounded soldiers from an armored personnel carrier struck by a rocket propelled grenade and a 60-mm. mortar round. Fearing the enemy would overrun their defenses, Sergeant First Class Smith moved under withering enemy fire to man a .50 caliber machine gun mounted on a damaged armored personnel carrier. In total disregard for his own life, he maintained his exposed position in order to engage the attacking enemy force. During this action, he was mortally wounded. His courageous actions helped defeat the enemy attack, and resulted in as many as 50 enemy soldiers killed, while allowing the safe withdrawal of numerous wounded soldiers. Sergeant First Class Smith's extraordinary heroism and uncommon valor are in keeping with the highest traditions of the military service and reflect great credit upon himself, the Third Infantry Division "Rock of the Marne," and the United States Army.