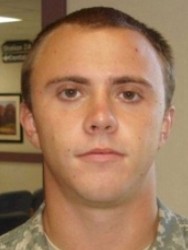 The President of the United States of America, in the name of Congress, takes pride in presenting the Medal of Honor (Posthumously) to Staff Sergeant Robert James Miller, United States Army, for conspicuous gallantry and intrepidity at the risk of his life above and beyond the call of duty. Staff Sergeant Miller distinguished himself by extraordinary acts of heroism while serving as the Weapons Sergeant in Special Forces Operational Detachment Alpha 3312, Special Operations Task Force-33, Combined Joint Special Operations Task Force-Afghanistan during combat operations against an armed enemy in Konar Province, Afghanistan on January 25, 2008. While conducting a combat reconnaissance patrol through the Gowardesh Valley, Staff Sergeant Miller and his small element of U.S. and Afghan National Army soldiers engaged a force of 15 to 20 insurgents occupying prepared fighting positions. Staff Sergeant Miller initiated the assault by engaging the enemy positions with his vehicle's turret-mounted Mark-19 40 millimeter automatic grenade launcher while simultaneously providing detailed descriptions of the enemy positions to his command, enabling effective, accurate close air support. Following the engagement, Staff Sergeant Miller led a small squad forward to conduct a battle damage assessment. As the group neared the small, steep, narrow valley that the enemy had inhabited, a large, well-coordinated insurgent force initiated a near ambush, assaulting from elevated positions with ample cover. Exposed and with little available cover, the patrol was totally vulnerable to enemy rocket propelled grenades and automatic weapon fire. As point man, Staff Sergeant Miller was at the front of the patrol, cut off from supporting elements, and less than 20 meters from enemy forces. Nonetheless, with total disregard for his own safety, he called for his men to quickly move back to covered positions as he charged the enemy over exposed ground and under overwhelming enemy fire in order to provide protective fire for his team. While maneuvering to engage the enemy, Staff Sergeant Miller was shot in his upper torso. Ignoring the wound, he continued to push the fight, moving to draw fire from over one hundred enemy fighters upon himself. He then again charged forward through an open area in order to allow his teammates to safely reach cover. After killing at least 10 insurgents, wounding dozens more, and repeatedly exposing himself to withering enemy fire while moving from position to position, Staff Sergeant Miller was mortally wounded by enemy fire. His extraordinary valor ultimately saved the lives of seven members of his own team and 15 Afghanistan National Army soldiers. Staff Sergeant Miller's heroism and selflessness above and beyond the call of duty, and at the cost of his own life, are in keeping with the highest traditions of military service and reflect great credit upon himself and the United States Army.

Afghanistan Campaign Congressional Medal of Honor Recipient. He served as a Staff Sergeant in Company A, 3rd Battalion, 3rd Special Forces Group Airborne, US Army. On January 25, 2008, Staff Sergeant Miller volunteered to lead a Special Forces Weapons team on a nocturnal patrol near the village of Barikowt, Nari District, Konar Province, Afghanistan. For most conspicuous valor and selfless service sacrifice, he was posthumously awarded the Medal of Honor on October 5, 2010, presented to his parents by President Barack Obama in a White House ceremony.