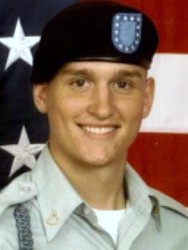 The President of the United States of America, in the name of Congress, takes pride in presenting the Medal of Honor (Posthumously) to Private First Class Ross A. McGinnis, United States Army, for conspicuous gallantry and intrepidity at the risk of his life above and beyond the call of duty. Private First Class McGinnis distinguished himself by acts of gallantry and intrepidity above and beyond the call of duty while serving as an M2 .50-caliber Machine Gunner, 1st Platoon, Company C, 1st Battalion, 26th Infantry Regiment, 1st Infantry Division, in connection with combat operations against an armed enemy in Adhamiyah, Northeast Baghdad, Iraq, on 4 December 2006. That afternoon his platoon was conducting combat control operations in an effort to reduce and control sectarian violence in the area. While Private McGinnis was manning the M2 .50-caliber Machine Gun, a fragmentation grenade thrown by an insurgent fell through the gunner's hatch into his vehicle. Reacting quickly, he yelled "grenade," allowing all four members of his crew to prepare for the grenade's blast. Then, rather than leaping from the gunner's hatch to safety, Private McGinnis made the courageous decision to protect his crew. In a selfless act of bravery, in which he was mortally wounded, Private McGinnis covered the live grenade, pinning it between his body and the vehicle and absorbing most of the explosion. Private McGinnis' gallant action directly saved four men from certain serious injury or death. Private First Class McGinnis' extraordinary heroism and selflessness at the cost of his own life, above and beyond the call of duty, are in keeping with the highest traditions of the military service and reflect great credit upon himself, his unit, and the United States Army.