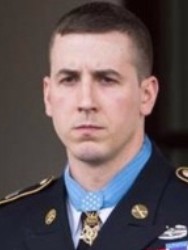 Ryan Pitts served for six years in the US Army and during a 2008 firefight was wounded, but fought on against overwhelming odds. He distinguished himself by extraordinary acts of heroism at the risk of his life above and beyond the call of duty while serving as a Forward Observer in 2d Platoon, Chosen Company, 2d Battalion (Airborne), 503d Infantry Regiment, 173d Airborne Brigade during combat operations against an armed enemy at Vehicle Patrol Base Kahler in the vicinity of Wanat Village, Kunar Province, Afghanistan on July 13, 2008. On July 21, 2014, Ryan Pitts was awarded the Medal of Honor by President Barack Obama.