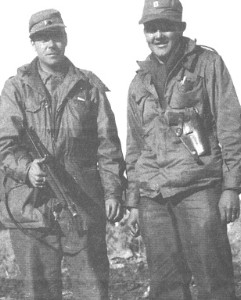 Carl L. Sitter, a 22-year-old officer from Pueblo, Colorado pushed his young Marines forward, encouraging them to meet the enemy and defeat them. He shouted encouragement, pushed them from position to position, ducking only when needing immediate cover from some new threat. A new burst of enemy gunfire drove him to the ground. Pinned down for the moment, he would not allow his Marines to stay pinned down for any length of time. That would be fatal for all of them. Shouting orders, he rose from his position to attack the enemy. As quickly as he had risen, he was driven back to the ground by a horrible blow to the chest.

In that millisecond between the moment when the fatal bullet arrives and the conscious mind records its last impulse, he knew he had been shot in the heart. There was a moment when all was numb...then the young officer realized that he was still breathing...still conscious of the gunfire around him. Instinctively he reached his hand to his chest, felt the ragged edges of his uniform and the warm flow of blood. And cold, hard, shattered steel. Too much steel for a single bullet.

Carl Sitter was a Man of War!

Sitting with quiet humility on a wooden pew in Watts Chapel at Union Theological Seminary and Presbyterian School of Christian Education is a man of peace, a student of the Scriptures. Next to his heart, he holds a Bible, worn from hours of study. Mid-term finals are finally done, and with a whispered prayer he says, "Lord if I can make it through one more semester, I'll have it made." For years now this student has struggled through daily classes, fought to maintain his grades, and cleaved to the dream of ministering peace to others. In many respects he is not at all, unlike the other seminary students, struggling with classwork, meeting in study groups, worrying about his performance on the next test, and looking forward to graduation.

One is left then to ask, what could have effected such a change in this man's life...from a man of war to man of peace, from the leader of Marines to gentle "shepherd"? Only when you came to know Carl Sitter did you begin to realize, there was no change. In both roles, he was the same great man, doing what the moment and situation demanded. And it was his strength of character that motivated him in both. That character came from two great lessons, the need for strength from someone greater than himself that he learned from his grandfather, and the importance of protecting the heart that he learned at Guam.

Carl Leonard Sitter was born in Syracuse, Missouri in 1922. In his early years, the family moved to Pueblo, Colorado to follow work. Carl's father was a steelworker and found steady employment in Pueblo's steel mill. Carl grew up in the city that would one day be named the "Home Of Heroes" by the United States Congress, never suspecting that one day he would be part of the reason for that title. He was typical as a lad, an only child who learned the value of hard work and a good education. In his youth, he delivered newspapers for the Pueblo Star-Journal (now the Pueblo Chieftain). In his high school years, he studied hard, graduating from Pueblo's Central High School in 1940. (Four years earlier Bill Crawford, who would receive the Medal of Honor during World War II had graduated from the same school.)

As a young officer and leader of Marines in combat, the lessons of those early days in Church and the words of his grandfather began to take on new importance. In the Pacific, Lieutenant Sitter found himself leading other young men into battle, their lives under his command. "That's when I started getting close to God," he recently said in an interview for his hometown newspaper. It was also when he learned the importance of protecting the heart, for it was the pistol covering his heart that saved his life at Guam. His faith...and he .45...enabled him to return home to build a life with his wife in Pueblo.

The Battle at Chosin Reservoir (Also Read: The "Frozen Chosin")

The battle at the Chosin Reservoir of North Korea in the days following Thanksgiving Day, 1950 was one of the most bitter and difficult trials in American history. Captain Sitter and his fellow Marines faced the coldest winter in a century, surrounded by a well-supplied Chinese Communist force that outnumbered them more than 10 to 1. Through it all, Captain Sitter held his force of young Marines together and taught them to fight, and survive, with pride. During two of their darkest days, one young Marine observed the helplessness of the company's situation and ask, "What are we going to do?"

Stephen Olmstead, who would eventually rise to the rank of Lieutenant General, was a young private under Captain Sitter's command. "Carl Sitter was just one hell of an inspiration to us at a time when we were really in big trouble," he said. "His skills, his leadership, and his inspiration are the reasons that a lot of us are still alive today." Two days of intense fighting on East Hill outside of Hagruri are cited in the citation for Carl Sitter's Medal of Honor. Those two days reflected only a portion of the week of hell Captain Sitter and his company survived. And when the job was done, Captain Sitter, wounded repeatedly, led his battered company back out of the Chosin Reservoir. In all, he would wear four Purple Hearts, as well as the ever-present pistol to protect his own heart.

More than thirty years in the Corps, then a "second career" in the Virginia Department of Social Services should have been enough to convince any man that he had done his "fair share" of duty for God, Country, and fellow man. Carl Sitter retired in 1985 at the age of 63, but Carl Sitter was simply retiring from his second career...not from his life of service. Never forgotten were the lessons he had learned as a boy from his minister grandfather, or the importance he placed upon protecting the heart. Carl Sitter chose to replace the worn leather holster of a .45 caliber pistol, with a leather-bound copy of God's Word.

There is something quite humbling in sharing such special moments with a man the stature of Carl Sitter, but Carl Sitter was that way with everyone he met. Like so many of those great men who wear the Medal of Honor, he was a man who never took himself or his "hero" status too seriously but was always concerned with the needs of others. Never pretentious, his pastor the Reverend Burt Brooks recounts how Carl Sitter showed up rather sheepishly for Church one Sunday to ask if it were possible for the pastor to arrange a substitute teacher for his Tuesday night Bible Class. The White House had invited him to dinner. "He said it in such a humble way, not a presumptuous way," says his pastor. "I told him I thought it would be alright." Carl Sitter was never one to miss any kind of personal commitment, but with that permission, Carl Sitter missed class to spend time with the President.