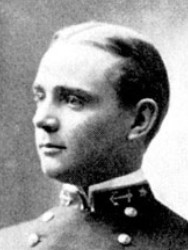 The President of the United States of America, in the name of Congress, takes pleasure in presenting the Medal of Honor to Lieutenant Commander Allen Buchanan, United States Navy, for distinguished conduct in battle during the engagements of Vera Cruz, Mexico, 21 and 22 April 1914. In command of the 1st Seaman Regiment, Lieutenant Commander Buchanan was in both days' fighting and almost continually under fire from soon after landing, about noon of the 21st, until we were in possession of the city, about noon of the 22d. His duties required him to be at points of great danger in directing his officers and men, and he exhibited conspicuous courage, coolness, and skill in his conduct of the fighting. Upon his courage and skill depended, in great measure, success or Failure. His responsibilities were great, and he met them in a manner worthy of commendation.