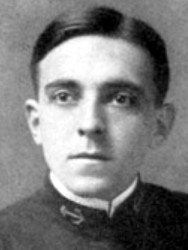 The President of the United States of America, in the name of Congress, takes pleasure in presenting the Medal of Honor to Lieutenant Charles Conway Hartigan, United States Navy, for distinguished conduct in battle during the engagement of Vera Cruz, Mexico, 22 April 1914. During the second day's fighting the service performed by him was eminent and conspicuous. He was conspicuous for the skillful handling of his company under heavy rifle and machinegun fire, for which conduct he was commended by his battalion commander.