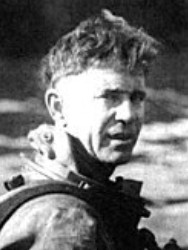 The President of the United States of America, in the name of Congress, takes pleasure in presenting the Medal of Honor to Chief Gunner's Mate Frank William Crilley, United States Navy, for extraordinary heroism in the line of his profession above and beyond the call of duty during the diving operations in connection with the sinking in a depth of water 304 feet, of the U.S.S. F-4 with all on board, as a result of loss of depth control, which occurred off Honolulu, Territory of Hawaii, on 25 March 1915. On 17 April 1915, William F. Loughman, chief Gunner's Mate, U.S. Navy, who had descended to the wreck and had examined one of the wire hawsers attached to it, upon starting his ascent, and when at a depth of 250 feet beneath the surface of the water, had his lifeline and air hose so badly fouled by this hawser that he was unable to free himself; he could neither ascend nor descend. On account of the length of time that Loughman had already been subjected to the great pressure due to the depth of water, and of the uncertainty of the additional time he would have to be subjected to this pressure before he could be brought to the surface, it was imperative that steps be taken at once to clear him. Instantly, realizing the desperate case of his comrade, Crilley volunteered to go to his aid, immediately donned a diving suit and descended. After a lapse of time of two hours and 11 minutes, Crilley was brought to the surface, having by a superb exhibition of skill, coolness, endurance and fortitude, untangled the snarl of lines and cleared his imperiled comrade, so that he was brought, still alive, to the surface.

Frank William Crilley was born in Trenton, New Jersey, on September 13, 1883. Following enlistment in the Navy in March 1900, he became a Gunner's Mate and received additional training as a diver. In 1915, while a Chief Gunner's mate, he made dives to over 300 feet during salvage operations on the sunken Submarine F-4 (SS-23) off Honolulu, Hawaii. On April 17, 1915 he rescued a fellow diver who had become entangled at a depth of 250 feet. For his heroism on this occasion, he was awarded the Medal of Honor in 1929.