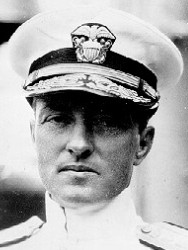 Richard E. Byrd was a U.S. Naval Officer, pioneer aviator, and polar explorer best known for his explorations of Antarctica using airplanes and other modern technical resources. On May 9, 1926, Byrd, acting as navigator and Floyd Bennett as pilot, made what they claimed to be the first airplane journey over the North Pole, flying from King's Bay, Spitsbergen, Norway, to the Pole and back. The flight lasted 15 ½ hours, with no mishaps beyond an oil leak from the starboard engine of their Fokker Trimotor airplane. For this feat, they were both awarded the U.S. Congressional Medal of Honor and were recognized as national heroes.