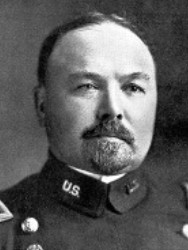 The President of the United States of America, in the name of Congress, takes pleasure in presenting the Medal of Honor to Colonel (Infantry) Frederick Funston, Sr., United States Army, for most distinguished gallantry on 27 April 1899, while serving with 20th Kansas Volunteer Infantry, in action at Calumpit, Luzon, Philippine Islands. Colonel Funston crossed the river on a raft and by his skill and daring enabled the general commanding to carry the enemy's entrenched position on the north bank of the river and to drive him with great loss from the important strategic position of Calumpit.