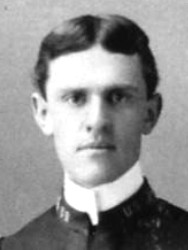 The President of the United States of America, in the name of Congress, takes pleasure in presenting the Medal of Honor to First Lieutenant (Infantry) Louis Joseph Van Schaick, United States Army, for most distinguished gallantry on 23 November 1901, while serving with 4th Cavalry, in action at Nasugbu, Batangas, Philippine Islands. While in pursuit of a band of insurgents, First Lieutenant Van Schaick was the first of his detachment to emerge from a canyon, and seeing a column of insurgents and fearing they might turn and dispatch his men as they emerged one by one from the canyon, galloped forward and closed with the insurgents, thereby throwing them into confusion until the arrival of others of the detachment.