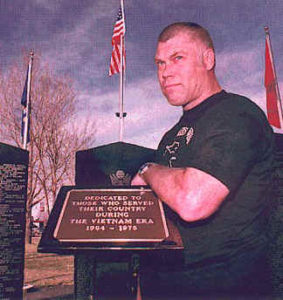 Brothers are often quickly distinguishable by a common surname. Those who have defended and preserved freedom have such a name in common. We are identified as "Veterans". Within the family of America's veteran population, you can find men and women who mirror all areas of family life. There are the leaders who guided us and prepared us for what was to come. These leaders can take on an almost paternal or maternal shape in our memories. We have those members of our family who stand out and make us proud, and we also have our "black sheep of the family" who may from time to time embarrass us. But we are family all the same.

When we think of the "brotherhood" that exists among veterans, it is usually the stronger, older brother that stands out. We remember our older brothers for their strength, for the way they "taught us the ropes", the way they stood up for us when we needed an ally. Delbert Schmeling was the kind of young soldier that would have been easy to think of as a younger brother, the one that needed a big brother to look out for him. He refers to himself as his hometown's "Forrest Gump". At first, there seems to be little in common between Delbert and the fictional character of the popular movie. In the movie, Forrest Gump is a hero who receives the Medal of Honor. Delbert Schmeling completed his tour of Vietnam duty having never even had to fire his M-16 rifle. Forrest Gump was a combat infantryman fighting the enemy in the field, Delbert was a "sanitation engineer" cleaning the field latrines for other soldiers.

When you begin to talk with Delbert, the similarities become more noticeable. Delbert talks with the same, slow drawl we recognized with the line, "Life is like a box of chocolates". His words reflect the same kind of simple logic. Upon meeting Delbert, many people would gain the first impression that he is handicapped. Delbert himself admits that he is a little slow mentally. Because of his struggle with Post Traumatic Stress Disorder (PTSD), Delbert IS considered 100% disabled by the Veterans Administration. But handicapped? No way. Delbert is the "kid brother" who grew up and never forgot his "big" brothers. I wish to God there were more heroes like him. Perhaps Forrest Gump should have characterized himself as his own hometown's Delbert Schmeling!