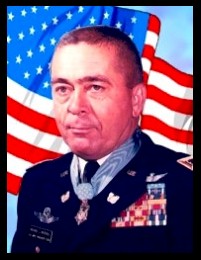 The President of the United States of America, in the name of Congress, takes pleasure in presenting the Medal of Honor to Chief Warrant Officer Michael Joseph Novosel, United States Army, for conspicuous gallantry and intrepidity at the risk of his life above and beyond the call of duty while serving as commander of a medical evacuation helicopter with the 82d Medical Detachment, 45th Medical Company, 68th Medical Group, in action against enemy aggressor forces at Kien Tuong Province, Republic of Vietnam, on 2 October 1969. Chief Warrant Officer Novosel unhesitatingly maneuvered his helicopter into a heavily fortified and defended enemy training area where a group of wounded Vietnamese soldiers were pinned down by a large enemy force. Flying without gunship or other cover and exposed to intense machinegun fire, Chief Warrant Officer Novosel was able to locate and rescue a wounded soldier. Since all communications with the beleaguered troops had been lost, he repeatedly circled the battle area, flying at low level under continuous heavy fire, to attract the attention of the scattered friendly troops. This display of courage visibly raised their morale, as they recognized this as a signal to assemble for evacuation. On six occasions he and his crew were forced out of the battle area by the intense enemy fire, only to circle and return from another direction to land and extract additional troops. Near the end of the mission, a wounded soldier was spotted close to an enemy bunker. Fully realizing that he would attract a hail of enemy fire, Chief Warrant Officer Novosel nevertheless attempted the extraction by hovering the helicopter backward. As the man was pulled on aboard, enemy automatic weapons opened fire at close range, damaged the aircraft and wounded Chief Warrant Officer Novosel. He momentarily lost control of the aircraft, but quickly recovered and departed under the withering enemy fire. In all, 15 extremely hazardous extractions were performed in order to remove wounded personnel. As a direct result of his selfless conduct, the lives of 29 soldiers were saved. The extraordinary heroism displayed by Chief Warrant Officer Novosel was an inspiration to his comrades in arms and reflect great credit on him, his unit, and the United States Army.
Department of the Army, General Orders No. 34 (July 16, 1971)

Mike Novosel was a genuine, 24-carat American war hero. He was the real deal; he had at least as much of the right stuff as any astronaut, and a Medal of Honor, too.

Before Pearl Harbor, when Novosel enlisted in the Army Air Corps, he wasn't setting out to be a hero. In fact, it looked like he would never get into combat at all. After fast-talking his way into the aviation cadet program (he was too short to pass the physical) and getting his wings, his services as a heavy bomber instructor pilot were too valuable to risk him overseas bombing the Axis. Germany's defeat and the consequent drawdown of the air corps's pilot training released Novosel to the Pacific theater. Assigned as a B-29 Super-fortress command pilot, he got to Tinian just before the Enola Gay took off to end World War II in the skies over Hiroshima. Following the war, he combined careers as an airline pilot and Air Force Reserve officer. the end of his war story? Not by a long shot!

Then came the Vietnam War. Applying for active duty, Novosel discovered that the air force was overstaffed with senior officers and no flying jobs available for 41-year-old reserve lieutenant colonels. Perhaps the army, which was frantically trying to build up a virtual air force of helicopters from almost nothing, could use an experienced instructor pilot who was rotary-wing qualified to train young soldiers to fly. Excellent plan! The army said yes. Surprisingly, however, the army decided that flying dust offs (medevac) in Vietnam was the job for this seasoned aviator. Two tours later (during his second tour he and his son were flying dust offs in the same unit when, within the span of a week, each was called on to save the other in an emergency combat evacuation), with 2,038 hours of combat flight, 2,345 aerial missions that evacuated 5,589 wounded, and a Congressional Medal of Honor, we have the rest of Mike Novosel's story.

(From the inside cover of DUSTOFF: The Memoir of an Army Aviator)