The Medal in a Shoebox 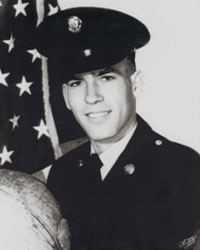 For more than three hours the battle had raged at Fire Support Base Illingworth, one of two small American outposts in Tay Ninh Province. Pete and his 18-man platoon had just returned from another recon patrol hoping to get a good night's rest. But on this night, there was no sleep to be found. Close to 400 enemy soldiers swarmed the small American outpost, and they had chosen the area of the perimeter defended by Peter Lemon's Platoon as their point of attack.

Already, the young soldier had successfully fought back two waves of enemy soldiers, survived the mortar attack, watched three friends die, and carried another wounded comrade to safety. Each time the enemy had come Pete Lemon had fought with fury, determined that if he could survive this assault, the worst would be over. Wounded a second time, when a third wave appeared poised to overrun the perimeter it seemed that all hope for survival was lost. "I said to myself, 'You're not going to make it through this one'," Pete later recalled. Determined to go down fighting the intrepid soldier found a working machine gun and jumped to the top of the berm (dirt pile surrounding the base camp) and, in a fully exposed position, continued to fire at the enemy.

Wounded yet a third time in that final assault, and reduced to having to fend off the enemy in hand-to-hand combat, somehow the fearless Army Ranger survived the night. In the days that followed he surveyed the impact of that night from his hospital bed. Every man in the platoon had been wounded. Dead were three of his closest friends, Casey Waller, Nathan Mann, and Brent Street. His own wounds would require more than a month of hospitalization, yet he had refused to be evacuated until the other wounded had been flown to a field hospital. Peter Lemon's war was over and within six months he had returned to his hometown in the state of Michigan as a civilian to try and forget an event that would forever haunt his dreams. When word arrived the following spring that President Nixon would present the Medal of Honor to him at the White House, Pete Lemon seriously considered turning down the award. There had been eighteen heroes on his section of the perimeter that night, three of whom had died. The Medal, if there was to be one, belonged to them...not to Pete Lemon.

Eventually, the Army prevailed upon the young man from Michigan to accept his Country's highest award. Ten days after his 21st birthday President Nixon greeted him at the White House and proclaimed him a "hero". Pete Lemon, who had become a naturalized U.S. citizen at the age of twelve, was the only Canadian-born Medal of Honor recipient of the Vietnam War and the first since World War II. It was not a role he had either sought or desired. Shortly after receiving the award, he moved to the Rocky Mountains of Colorado. There he returned to college where he received Bachelors and Masters Degrees, and quietly built several successful businesses. Few people, including his closest friends from his college days or even his next-door neighbors, knew that Peter Lemon was a recipient of the Medal of Honor.

One of Pete's fellow Medal of Honor recipients had once said, "It's easier to earn the Medal than to wear it." Pete didn't even try. But while he shunned public recognition of his military heroism, he never forgot the men who had been with him on that night. The survivors of the April Fools Day assault on FSB Illingworth had tried to stay in touch through the years, attempted to support each other through the tough times of "survivor's guilt" and "what if?" questions. While visiting by phone with one of those comrades one night almost thirteen years after his moment of valor, Pete was asked about his Medal of Honor.

In the weeks that followed Pete thought often of that conversation. From time to time he would look at the Medal and his name engraved on its backside, then put it away in the realization that it belonged to other men. More years passed. Then one night while visiting with yet another of the men from his unit, his former comrade in arms put it into perspective. "Look Pete," he told the reluctant hero, "Casey, Nathan, and Brent are gone! If you really feel like that Medal belongs to them, you need to wear it. Every time you wear that Medal you are reminding people about guys like them who fought....and died."

The transition from "reluctant hero" to "Medal of Honor Recipient" would take time, and simple steps like the one Pete had taken that day in 1993 at my son's middle school. Pete did attend the Medal of Honor functions, he had a responsibility to his fellow Medal Recipients to do so, and he had never been a man to shy away from responsibility. Returning from one such reunion in 1996 Pete was confronted by a question that would give him a new perspective on the award. After several days of mingling with heroes of the last three wars Pete's children asked,

The answer was not so simple, for Pete understood it from his children's perspective. Everyone knew these men were heroes, Medal of Honor recipients. But his own children had looked past the Medals around their necks, read the lines in their faces and the scars they wore, and wondered about the men themselves. Pete himself had to admit that, beyond the Medal he shared in common with them, there were many he knew very little about personally. And so, for perhaps the first time in the history of the award, someone began asking the question "Beyond the Medal you wear, just who are you and what do you want to tell America?"
In 1997 Pete tried to answer that question, not only for his own children but for children across our Nation. More than half of the living Medal of Honor recipients responded to the question with sometimes humorous, other times somber...but always moving thoughts from their heart. Those answers were published in Pete's first book, Beyond the Medal, A Journey from Their Hearts to Yours.

"This book ought to be in every school," said a young student shortly after the release of Beyond the Medal. That student had used the book for a report in his own school. Other students wrote to Pete after reading his book, many of them echoing the same thought. That same year the Rotary Club in Pueblo, Colorado had a similar idea and purchased autographed copies for every school in the city and county's two districts. As Pete Lemon pondered these things and remembered his own definition of a "good soldier" and his present role as a "citizen soldier", a new mission developed. For more than a year he began to lay the groundwork for that mission, the dream of putting the words of yesterday's greatest heroes in hands of tomorrow's heroes. True to his mission, his hard work and sacrifice are now paying off. Early in October 1999, a special new printing of Beyond The Medal is being mailed to every middle school and high school in our Nation...more than 32,000 of them. 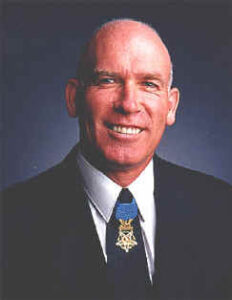 With the humility that characterizes our greatest heroes, Pete would be quick to give the credit for the success of this new mission to the sponsors of the program which includes the Castle Rock Foundation, Fulcrum Publishing, The Military Order of the Purple Heart (Fountain, CO), the Congressional Medal of Honor Society, and other anonymous supporters. As one of Pete's closest friends, I know all too well how many hours he has sacrificed and the money he has invested personally, to accomplish the mission for which he so quickly gives others credit. Some things just never change!

It took 25 years from the date of his award for him to learn to become a Medal of Honor Recipient. Is he finally comfortable with it? Not really. The Medal he wears still belongs to other men in his own heart and mind. It is for them that he accepts his role and accomplishes his newest mission...hoping that when others see the five-pointed star hanging from its ribbon of blue around his neck that they will look beyond the Medal and see: