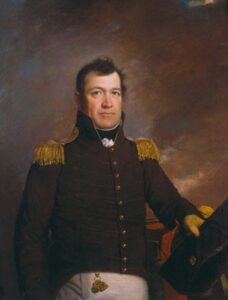 Jacob Jennings Brown was the U.S. general during the War of 1812, who was known as "the fighting Quaker." The Americans retreated to Fort Erie, where they were besieged by the British. Brown, launched a sortie on September 17 that destroyed so much of the enemy artillery that the British abandoned the siege a few days later. Though Americans were in no shape to pursue, Brown's hard fighting solidified his position as a national hero: a fighting Quaker and the ideal model of a citizen. As the army's senior ranking officer, he became its commanding general in 1821 and held the appointment uneventfully until his death.