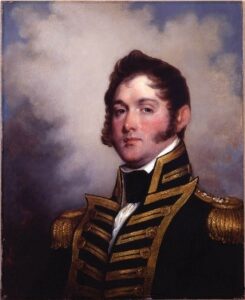 Oliver Hazard Perry was a U.S. Naval officer who became a national hero when he defeated a British squadron in the Battle of Lake Erie in the War of 1812. Perry's successful action at Lake Erie helped ensure U.S. control of the northwest; it also raised him to a position of national eminence and earned him a promotion to the rank of captain.