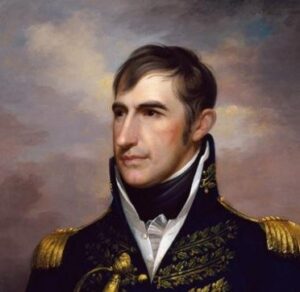 William Henry Harrison was the last American president to be born a British subject and grew up in the backdrop of Berkeley Plantation, one of Virginia's oldest estates. He was the son of a prominent political figure and signer of the Declaration of Independence, Benjamin Harrison. During the War of 1812 he continued to improve his public image by leading successful campaigns against British and Native American forces in the northwest.