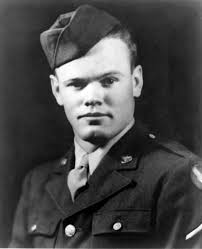 The sound of breaking glass shattered the pre-dawn stillness at the U.S. Army Headquarters in Honolulu, Hawaii. Nervously glancing about for MPs or other officials, shaky hands grasp the golden star and its attached blue ribbon from the display case. It was the Medal of Honor, the only one available in the Pacific Theater of Operations. An Airman stuffed the Medal quickly in his pocket and ran for the airfield with the prize. Back at Guam, another airman lay dying, unaware of the extremes to which his fellow fliers would go to ensure that he received his Medal of Honor before he drew his last breath.

General Curtis LeMay, had been awakened at 5 A.M. to sign the Medal of Honor citation. Then a special plane had been dispatched to obtain the only Medal in the Pacific from its display case in Honolulu. When no one could be found during the predawn hours to unlock the display, the determined fliers broke the glasses and absconded with the Medal. In the history of our Nation's highest award, the actions were unprecedented. But so too was the heroism of a dying young B-29 radioman.

Captain Anthony Simeral set his jaw and pushed the nose of his B-29 bomber City of Los Angeles towards the target. He couldn't completely ignore the exploding flak around his aircraft or forget the enemy fighters that dodged in and out of his formation to shower the aircraft with machine-gun bullets. But Captain Simeral had been flying long enough to know that the best way to deal with those occupational hazards was to "grit your teeth" and fly through it, reach your target and drop your bombs, then head for home.

It was April 12, 1945, and the City of Los Angeles was the lead B-29 in the 52nd Bombardment Squadron's attack on Koriyama, Japan. Next to the pilot in the cockpit was Lt. Roy Stables. In the rear of the aircraft, ten men went about preparing to finish their mission. On this day, there was extra work. As the lead aircraft, the City of Los Angeles would mark the target for the other bombers. "Ready?" Captain Simeral inquired into the intercom. In the belly of the bomber, Sergeant Henry "Red" Erwin was ready. At the appointed time he would drop the market, a 20-pound white phosphorus canister with a six-second fuse, through a tube near the bomb bay. The handsome 24-year old radioman from Alabama knew his job. This was his tenth combat mission.  "Now, Sergeant", he heard the Captain speak into his headphones. Quickly, Erwin positioned the canister in its narrow chute, pulled the pin, and let it drop into the skies over Japan. Only it didn't!

In a blinding explosion of heat and light, Red Erwin felt his nose literally melt from his face, something had gone wrong. Whether the flare was faulty or due to a bump in air currents, no one would ever know why, but the flare failed to clear the chute. Within six seconds it exploded into flames, propelling itself directly into Erwin's face and falling back into the belly of the City of Los Angeles... Scant feet from three tons of incendiary bombs. Nine crewmen stood in stunned horror, facing the knowledge that death for all of them was only seconds away. The billowing white smoke that made the white phosphorus such an ideal market now filled the entire aircraft. In the cockpit, choking on smoke and unable to see, the Captain could no longer control his aircraft. The City of Los Angeles lurched over and began a rapid dive towards the ground. The only question was whether the crew would die in a fiery crash or spectacular explosion.

Then, in the midst of the billowing smoke, an apparition began to rise. Unable to see after catching the full force of the white phosphorus in the face, Red Erwin found the burning canister by touch. Burning at thousands of degrees Fahrenheit, it was not hard to locate. Clutching the white-hot canister to his body and holding it in place with his arm, Red Erwin struggled to ignore the pain and crawl towards the cockpit. His entire upper body was aflame, his hair completely burned away, his clothing vaporized and his face burned beyond recognition. For the crew, it was a ray of hope... no man would endure the trek required to eject the lethal canister from the only available opening, a cockpit window. Added to that, the patch was blocked by the navigator's table.

Somehow, Red Erwin and to struggle on, clutching the flaming incendiary to himself.  With unbelievable strength, he tucked the canister under his arm, unlocked the constructing table, and moved it aside. Almost ten seconds of indescribable agony had already passed and Red Erwin was only halfway to his goal. "Open the window! Open the window!" Sergeant Erwin shouted to Lt. Stables. Somehow the co-pilot overcame his shock at seeing the flaming soldier doing what no human being should be capable of accomplishing and managed to open the window. "Excuse me, sir," Red Erwin said through his pain, and then launched the flaming canister to the wind before collapsing to the floor in flames. Only 300 feet from the ground, Captain Simeral pulled the City of Los Angeles out of its dive to head for Iwo Jima, the nearest landing site affording medical aid. The crew turned fire extinguishers on the prostrate, burning body of Red Erwin and Lt. Stables administered to dull the pain. Through it all, the trip back, and days of surgery following, Red Erwin remained conscious.

The doctors gave it their best shot... whole blood transfusions, internal surgery, antibiotics to fight infection. For hours they labored to remove embedded white phosphorus from his eyes. The chemical spontaneously combusts when exposed to oxygen, and as each fleck of incendiary was removed it would burst into flames, torturing the airman once again. Through it all Erwin has said, there was an angel by his side saying "Go, go, go. You can make it." Everyone expected Red Erwin to succumb to the pain if not the wounds. That night the officers of Erwin's unit prepared his Medal of Honor citation. At 5 A.M. the following morning they awakened General Curtis LeMay at his headquarters in Guam. LeMay took a personal interest in Erwin, sending his recommendation to Washington, D.C., and also arranging to fly Red's brother who was with a Marine Corps unit in the Pacific, to his "death bed."

Meanwhile, Red Erwin was flown from Iwo Gima to Guam, where he could receive more complete medical attention. It was there on April 19, 1945... Just one week after his moment of heroism and sacrifice, that General LeMay told him: "Your effort to save the lives of you fellow airmen is the most extraordinary kind of heroism I know."

Through his bandages, Red Erwin simply replied, "Thank you, sir." Then General LeMay pinned the Medal of Honor taken from a display case in Honolulu to the bandaged body of Erwin. 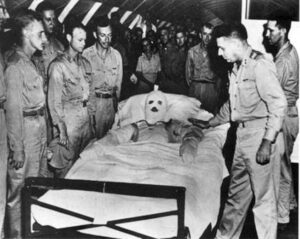 The crew of the City of Los Angeles, Major General Willis Hale, and Red Erwin at the presentation of his Medal of Honor.

Sometimes it takes far more courage to live than to give up and die. Henry Erwin went through 43 operations before he was finally discharged from the Army in 1947. By that time the smells of burned flesh and hospital disinfectant had come to symbolize unspeakable pain for him. Yet, with incredible courage, Red Erwin went to work for the Veterans' Administration to work with burn patients.

One might say that Henry Erwin, despite his scars and wounds, went on to lead a typical life... marrying, raising children, and becoming a grandfather. But there was nothing "typical" about Red Erwin.

On January 16, 2002, Henry Erwin passed away. Our Nation is richer for his life, and poorer for his loss. May his memory live to inspire us for future generations.