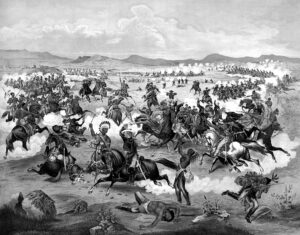 The American Indian Wars (also known as the Indian Wars or the First Nations Wars) is the collective name for the various armed conflicts that were fought by European governments and colonists, and later by the governments and settlers, against various American Indian and First Nation tribes. These conflicts occurred in North America from the time of the earliest colonial settlements in the 17th century until the early 20th century. The various wars resulted from a wide variety of factors, including cultural clashes, land disputes, and criminal acts committed by both sides. The European powers and their colonies also enlisted Indian tribes to help them conduct warfare against each other's colonial settlements.

After the American Revolution, many conflicts were local to specific states or regions and frequently involved disputes over land use; some entailed cycles of violent reprisal.