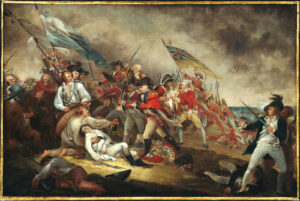 The American Revolutionary War (1775–1783), also known as the American War of Independence, was fought primarily between the Kingdom of Great Britain and her Thirteen Colonies in America; it resulted in the overthrow of British rule in the colonies and the establishment of the United States of America.

After 1765, growing constitutional and political differences strained the relationship between Great Britain and its American colonies. Patriot protests against taxation without representation followed the Stamp Act and escalated into boycotts, which culminated in 1773 with the Sons of Liberty destroying a shipment of tea in Boston Harbor. Britain responded by closing Boston Harbor and passing a series of punitive measures against the Massachusetts Bay Colony. Massachusetts colonists responded with the Suffolk Resolves, and they established a shadow government that wrested control of the countryside from the Crown. Twelve colonies formed a Continental Congress (with the exception of Georgia) to coordinate their resistance, establishing committees and conventions that effectively seized power.