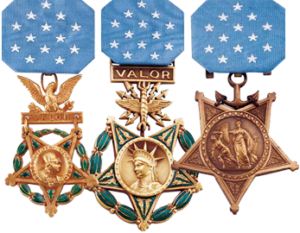 Only one woman, Dr. Mary Edwards Walker (Civil War) has ever received the Medal of Honor. However, an additional woman's name is on the Roll of Honor. During the Vietnam War, Marine Captain Jay R. Vargas received the Medal of Honor. Before his award could be presented to him, his mother passed away at home in Arizona. Vargas requested that his mother's name be engraved on the back of his Medal of Honor instead of his own. President Nixon honored that loving request and the name of M. Sando Vargas...Jay Vargas' mother...was added to the Honor Roll.

A President Receives the Award

The first Medal of Honor ever presented was awarded by Secretary of War Edwin Stanton on March 25, 1863, to 19-year-old Ohio Army Private Jacob Parrott. Parrott was a member of Andrew's Raiders, immortalized in the movie "The Great Locomotive Chase".

Eventually, Parrott's 18 fellow soldiers from that mission received Medals of Honor, 4 of them posthumously. All 19 of these heroes are from Ohio.

The oldest Medal of Honor recipient is General Douglas MacArthur, who was 62 years old when he received the Medal.

World War II hero Jack Lucas became the youngest man in this century to receive the award when he threw his body over two grenades at Iwo Jima just 5 days after his 17th birthday. At the time of his heroism, he had already been in the Marine Corps for three years.

The last Medal of Honor action of the Vietnam War occurred on Halloween night in 1972 when Navy SEAL Michael E. Thornton risked his own life to rescue his wounded team leader. His team leader, Navy Lt. Thomas R. Norris had been submitted for the Medal of Honor for his own heroic actions just 6 months earlier.  Thornton was the first person in more than a century to receive that honor for saving the life of another Medal of Honor recipient.  Norris did not receive his award until March 6, 1976.  The movie BAT*21 is based on the rescue mission that Halloween night in Vietnam.

Is It Illegal to Wear Someone Else's Medal of Honor?

Yes, it is illegal to wear someone else's Medal of Honor, but it is not illegal to pretend you have one. United States criminal law forbids the unauthorized wearing, manufacture, and sale of military decorations, and misuse of a Medal of Honor carries a particularly heavy penalty.

In 2006, President George W. Bush signed into law the Stolen Valor Act of 2005, which imposed a prison sentence of up to one year on anyone falsely claiming to have received a Medal of Honor. (Pretenders to other military decorations faced imprisonment for up to six months.) The Supreme Court struck down the act on June 28, 2012, ruling that it violated the right to free speech guaranteed by the First Amendment.

Congress passed an amendment in 2013 to make it a crime for a person with the intent to obtain money, property, or other tangible benefits, fraudulently holds oneself out to be a recipient of certain or medals.